When in Paris do as the Parisians do … just don’t do it in Israel.

We were recently treated to another Neve Gordon special on the Guardian’s CiF website, accusing Israel of “ethnic cleansing” because it actually had the temerity to remove 300 Bedouins (by Gordon’s count) from an illegal encampment of what he referred to as the Bedouin village of al-Arakib. The article is so full of half-truths and inflammatory language that it is worth reviewing how this tenured professor at Ben Gurion University keeps his thumb on the scale when reporting on the removal of a squatter camp.

“I drove towards al-Arakib, a Bedouin village located not more than 10 minutes from the city”

Al-Arakib is not a “village”. It is the location of a site where some Bedouin decided that they would build what is delicately referred to in Israel as an “unrecognized settlement”. That is to say, a settlement built illegally on land that does not belong to them. Since it is “unrecognized” you will search in vain for it on a map, and it is not connected (legally) to electrical power, nor does it have a source of water nor is it connected to a sewage facility. To add insult to injury, this lack of services then becomes a source of further indignant claims against the State of Israel.  Gordon finished his article with a paragraph that included the following denunciation of Israel: “There are 155,000 Bedouins in the Negev, and more than half of them live in unrecognised villages without electricity or running water”.

“A whole village comprising between 40 and 45 houses had been completely razed in less than three hours.”

Gordon knows perfectly well, as does anyone who drives from Beersheba northwards to Tel Aviv, that “villages” like this comprise largely a set of makeshift tin shanties and tents. It would simply be referred to as a squatter camp in most countries but he tries to create the impression of a significant community of permanent homes. The Jerusalem Post reported that “Eleven cinderblock buildings and 34 made of tin were demolished, the ILA [Israel Lands Administration] said.”

Gordon made the further claim that “all around them uprooted olive trees lay on the ground”, but the JP reported that “Some 850 trees were removed and will be replanted elsewhere. The ILA said the uprooted trees had been planted by residents to strengthen their claim to the illegal settlement”.

As a member of the BGU faculty, moreover one obsessed with the issue of the legitimacy of the claims (except, of course, of Jews) to these barren lands, Gordon also must know perfectly well that the Bedouin claim to lands in the area is being disputed in the courts in Beer Sheva and the Bedouin claims are, by most estimates, quite doubtful. In an example of the topsy-turvy thinking that pervades the world of those who feel that anyone who is not Jewish has a natural right to build whatever and wherever he likes in Israel, the attorney for the Bedouin, the notorious Michael Sfard – see NGO-Monitor’s report on Sfard’s work on behalf of Shawan Jabarin, a Palestinian with alleged ties to the PFLP terrorist organization – makes a “now you see it-now you don’t” claim:

According to Sfard, the Ottoman authorities bought the land on which Be’er Sheva was built from the Bedouin, and the Jewish National Fund also bought land from them during the British Mandate era.

Well, that seems pretty cut and dried – at best, if these nomads ever owned the land (a contradiction in terms in and of itself), they sold it. But wait – Sfard then comes up with an amazing non-sequitur:

Hence the Bedouin’s ownership of the lands was acknowledged.

Thus, since they sold the land, they must have once owned the land … and therefore, even if they sold it they still own it …!!

Several of the comments on the thread displayed little appreciation for Gordon’s point of view, CiFers pointing out that removing squatters is something carried out in every country:

Perhaps a little disappointed at the unsatisfactory reception this article received, the Guardian decided to step it up notch, and replaced the still picture initially attached to the article, which was bad enough, with a video clip:

But even that was not enough – the message apparently still wasn’t strong enough for Guardian Deputy Editor Katherine Viner, so an entirely separate, additional posting was set up just to display the video. This, it seems, Viner believes would ensure that the removal of 40 huts and shacks and sending 300 people, mainly children, back to their real homes in Rahat, would be appropriately compared to, say, the Rwanda massacre, or perhaps Bosnia: Ethnic cleansing in the Israeli Negev .

Well, funnily enough, this evening I was watching France24’s daily broadcast, and there was a lengthy report and debate on Sarkozy’s proposal to remove French citizenship from “immigrants” (whose religious affiliation is carefully not mentioned but we all know who they are …)  if they turn out to be criminals. That, in itself, is a topic to follow-up on in light of the Guardian’s recent articles about Israel’s decision to send 400 children born to foreign workers home. However, what really caught my attention was a truly horrific video of French police removing squatters from a building in Paris, which you can watch here if it is no longer available on France24’s site  (and it truly is shocking): 2010 *Disturbing* Police Filmed Dragging Women & Babies During Protest .

So I decided to see how the Guardian treated this example of ethnic cleansing, and found this: France’s racial intolerance comes from the very top.

“The film was shot in the early morning on 21 July in a particularly volatile town called La Courneuve, outside a block of flats called Balzac. The decaying 15-storey building is set to be demolished, leaving dozens of squatters homeless. [The idea that a 15 story building holds only “dozens” of people is ludicrous, by the way – there must have been many more – my comment]. Many are young women originally from the Ivory Coast, and it was these who were mainly filmed as they were targeted while taking part in a sit-down protest. At least one pregnant woman faints, while a little boy is in hysterics as he is dragged along the ground under his mother.”

Once again we see the Guardian World View on display – the French remove squatters, cheerfully bouncing pregnant women and children along the pavement, and that is “Racial Intolerance”.

Strong words, but not quite as strong, one could argue, as accusing the French of “ethnic cleansing”, although the term is somewhat apologetically introduced a little later:

By the by, Sarkozy’s police also started razing Gypsy camps, as the president pledged to expel Roma travellers in a manner already being likened to ethnic cleansing.

Wondering if there would be comments from CiFers similar  to the “robust” condemnations that removing squatters as brutally as this would earn if it were reported from Israel, I took a look at the comments on the thread. Perhaps not surprisingly, given how close to home this version of the problem is, they were rather different from the sort of thing one sees on the Israeli threads: 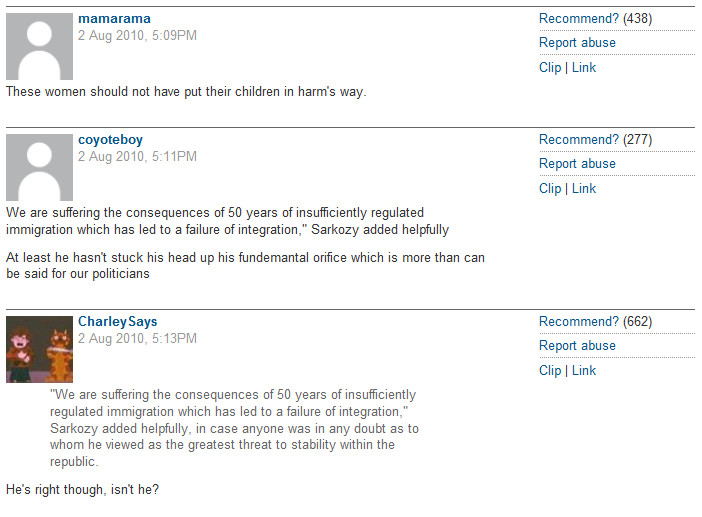 So, when the French do it a few miles from London, it’s a chance to cheer the home team on in the hope that in Britain the powers-that-be might be watching and learning how to deal with squatters in no uncertain terms. But if Israel removes squatters building an encampment on land they do not own, without injuring anyone, that is “ethnic cleansing” above and below the line.