The Gaza Obsession and Pakistan’s Misery

For a couple of years, before the Guardian saw fit to ban me for reasons never explained, I, like many others,  spent quite some time on CiF pointing out the enormous disparity between the Guardian’s obsession with the Palestinians  and its almost total silence regarding far greater tragedies elsewhere.  This, of course, is dismissed by the faithful as “whataboutery”, no matter how true and how disastrous for needier causes that could do with the publicity. One of the consequences of the obsession with Gaza by the Guardian and other media has been the diversion of aid in almost unimaginable amounts to the Palestinians that could usefully have been deployed elsewhere.

Recently things have changed somewhat with the emergence of a growing number of well-publicized luxury facilities in Gaza and the West Bank. The unintended consequence of the recent appearances of publicity videos showing world-class water parks, swimming pools, hotels and restaurants has been a number of articles in mainstream media like this one rethinking the received version of the Palestinians as the world’s worst-off people.

Information is pouring out of Gaza and the West Bank in the media and on the Internet showing that the image that the Guardian tries to project more than any other paper is simply and, I believe, deliberately wrong. A Mövenpick Hotel Ramallah to open in third quarter of this year is one of the latest examples. Frankly, this is a good thing – people enjoying themselves at water parks or slurping down a sundae at Mövenpick  are less likely to want to sign up for a course in Suicide Belt Making 101.

How does this relate to Pakistan? Well, the flooding there, which has reached biblical proportions, has produced a refugee community that far exceeds the 700,000 Arabs who fled Israel 60 years ago who originally claimed refugee status, and even those descendents who, three generations later, still claim it. The estimate now runs to about 14 million Pakistanis displaced and entire communities simply washed away, as can be seen in these horrific pictures. Pakistan has immediately turned to the US for assistance – to the country that only a few days ago it was bitterly complaining about as a result of the wikileaks saga.  The Washington Post estimates that billions of dollars will be needed for reconstruction.

One might think that this immense disaster would sweep aside the focus on Gaza and articles about the deaths of nine terrorists aboard the Mavi Maramara from the Guardian.  After all, this was a paper that devoted tens of articles to the death of a single Hamas terrorist in Dubai, and similar numbers of articles to the interception of the Mavi Maramara (mislabeled by the Guardian as a “raid”) and deaths of nine IHH terrorists on that ship. There is no way to count the number of ferociously condemnatory and contextless articles that have appeared in the Guardian as the result of the deaths of some 1,400 Arabs in Gaza during Cast Lead.  How many articles should 14 million refugees and, at this time, 1,500 deaths in Pakistan deserve? But the obsession continues, with the two issues essentially accorded equal weight on the “World News” page of the Guardian’s blog (in fact, there are three stories about Netanyahu’s testimony, including a video clip): 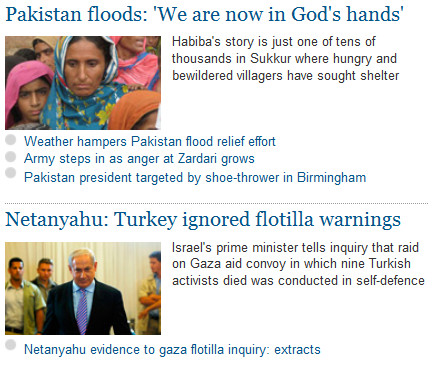 The desperately poor people of Pakistan who have been washed out of their homes face a disastrous future in which they will be cared for far less than those in Gaza. Yet we can look forward to ever more articles at the Guardian website about “flotillas”, and “prison camps”, and “power outages” in Gaza (caused by squabbling between Hamas and the PA). There will be no CiF article by Victoria Brittain about the flooding or blue babies in Pakistan unless she can find a way to blame it on Israel as she did for Gaza. In fact, it appears there has only been one article on CiF so far – Pakistan’s floods are not just a natural disaster.  The article points out that the impact of greed and incompetence in Pakistan has worsened the situation.

Pakistan itself rushed to condemn Israel over the Mavi Marmara interception, and, of course, Cast Lead, toeing the Moslem line over a conflict in which it has no discernible interest. Now Pakistan’s people will pay the price as they struggle for a share of the world’s aid beneficence. The obsession of countries like Pakistan and media like the Guardian and its cohort of Israel bashers with Gaza will continue to suck the air out of greater needs elsewhere – specifically now the needs of those in Pakistan as they get in line behind Haiti.

The death toll in Pakistan will rise, and the poverty and suffering will increase. So will the extremism and instability of the most dangerous and fragile nuclear-armed country in the world while the Guardian and others cheer on ships of fools from Lebanon or elsewhere. Gaza will still come first despite the loaded food stalls, the shopping mall, the smuggled goods, the UNRWA handouts.

UN workers and “activists” will continue to stay at the Gaza Grand Palace Hotel and enjoy their meals at Roots Club. Meanwhile, people in Pakistan will wonder why they get so little of the world’s attention. Like the people in all those barely remembered “whatabout” places – Congo, Darfur, Sri Lanka, Tibet, and on and on – while the Guardian and others focus on anything that they feel can be used to delegitimize Israel.