This is going to be difficult, but imagine you are a British neofascist:

“Further, imagine, that you long for the days when you can openly worship Nazism, as your forbears in and around the leadership of the British National Front used to do.

Imagine your frustration, you are a British neofascist and yet you can’t be open about it, you can’t express your admiration for David Irving or visit extreme right-wing Japanese groups without someone finding out.

In short you are in a pickle, you want your odious ideology to succeed but realise that most people would sooner eat their own vomit than join you in the Nazi salute.

Then you have a bright idea. Why not hide the extremes of your neofascist ideology? Why not wear a suit? Why not try to pick on the weakest in society as your heroes from Nazi Germany did, but do it with a twist?

Cunningly, as a devious British neofascist, you would not attack the ultimate target: Jews, directly

No, that wouldn’t work, so you have to think of another scheme.

Who to attack? And who to whip up hatred against? Who to use to build a street army?

Then in a flash it occurs to you, you’ll attack immigrants, but stop, that hasn’t been too successful for the BNP. What else can you do?

Ahh, attack Muslims, but not directly, not whilst wearing your suit.

So you infiltrate a new organisation, you make sure that all your neofascist and neo-Nazi pals are in key positions of power, and eventually take it over.

Still you’re worried, as a devious British neofascist, that your political enemies with see through these tactics, and then it hits you, how to throw them off the scent?

Pretend that you like Jews. Get one of your knuckle headed friends to get an Israeli flag or two. And when you walk around wave it a lot. What a laugh!

Your mates think it is funny, they hate Jews with a passion, but it is a big wind-up and people don’t know how to react, many stop and think, others are fooled and some like your natural opponents in the liberal minded Guardian suddenly think that a bunch of neo-Nazi skinheads have converted to Zionism, how wrong could they be!

All the same, as a British neofascist, you don’t mind if the Guardian takes pot-shots at Jews.

In fact, you think it is funny, that highly educated journalists don’t really understand modern neo-Nazism, letting you have your way. And once you’ve whipped up enough hatred against the Muslims then you can turn to other ethnic minorities, and eventually Jews.

Whilst all this is happening you, as a British neofascist, will have an able ally in the Guardian as they don’t much care for Jews or Israelis either. Plus the fact they haven’t worked out that you can’t stand Jews or liberals, but their gullibility blinds them to the fact that neofascists are frequently dishonest about their motives.

The Guardian types don’t know that you will do anything to get power, even tell fibs. But none of that will matter once you’ve grown from a proto-street army to an organised force, all of that will be too late.

But, as a British neofascist, you thank your lucky stars that the Guardian editorial staff seem to know next to nothing of history, care even less and have their own set of prejudices.

Then you trot off to polish your steel capped-boots, ponder a recruitment campaign at the Guardian, all with a smug grin on your face.” 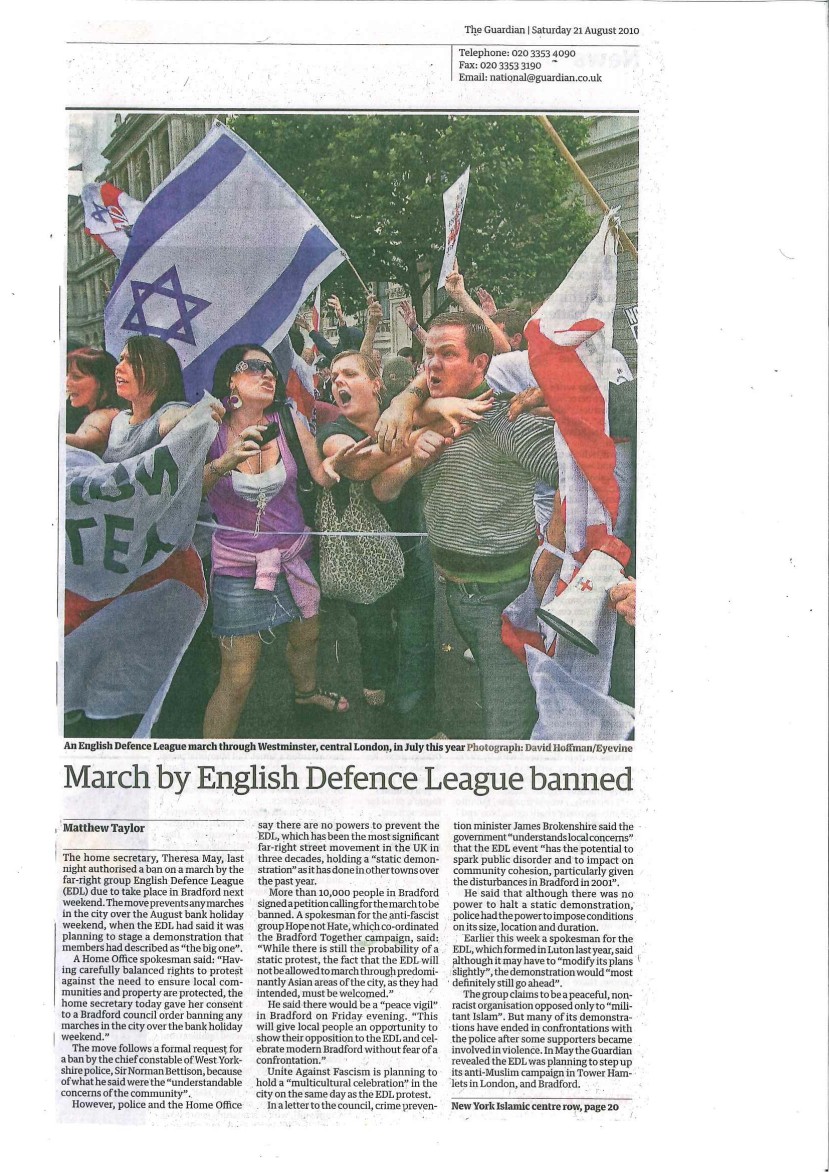 Actual Guardian article on the EDL, published on August 21, 2010