This piece on the English Defence League (EDL) was posted recently at Modernity Blog, and is part of CiF Watch’s ongoing conversation and debate about the EDL.

The true character of the EDL was revealed over the weekend.

They sought conflict in Oldham and when the police tried to restrain them the police were attacked with glasses and bottles. 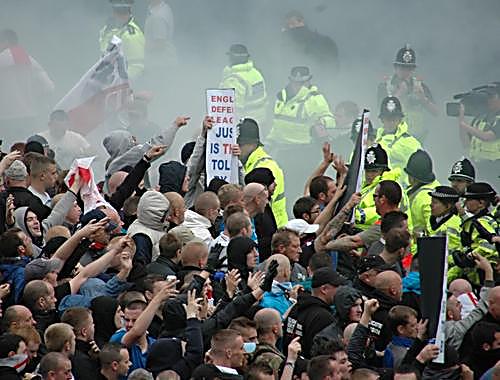 “A hundred EDL supporters turned up unannounced in Oldham town centre yesterday in a worryingly new development. While they ostensibly claimed to be marking the anniversary of the 9/11 attacks, and indeed they did lay a wreath, the nature of their mobilisation could be a sign of things to come.

The EDL met up in the Greaves Arms and marched through Oldham town centre to the local cenotaph where they laid a wreath and held a two minutes silence. Among those there were a number of current and former BNP members, including Griffin’s former bodyguard and convicted drug dealer Jock Shearer. The police moved in to break up the gang and they were met with a volley of glasses and bottles. A number of people were served with dispersal orders (Section 27 of the Public Order Act) which banned them from the town for 24 hours.

It was clear that many EDL supporters are becoming increasing frustrated at how the police have contained them in recent protests, not least in Bradford, where they were penned in by police and an eight foot wall. A growing number seem keen to just go it alone with spontaneous actions.

I’m nervous about where this is all going and I fear a growing cycle of both targeted and indiscriminate violence by EDL supporters. Some are actively hunting down their opponents, including myself, while actions like we saw yesterday in Oldham could spark off real violence within communities. And of course violence is what these people are after.”