The Abu Rahma Hoax, pt. 3 (Does this Palestinian version of events in Bilin seem credible to you?)

This map, from today’s issue of Ha’aretz, represents an aggregate of the most recent (various) Palestinian versions of events at last Friday’s violent protest in Bilin which, it is alleged, led to the death of Jawaher Abu Rahma. (See our posts on the incident, here, here and here.) 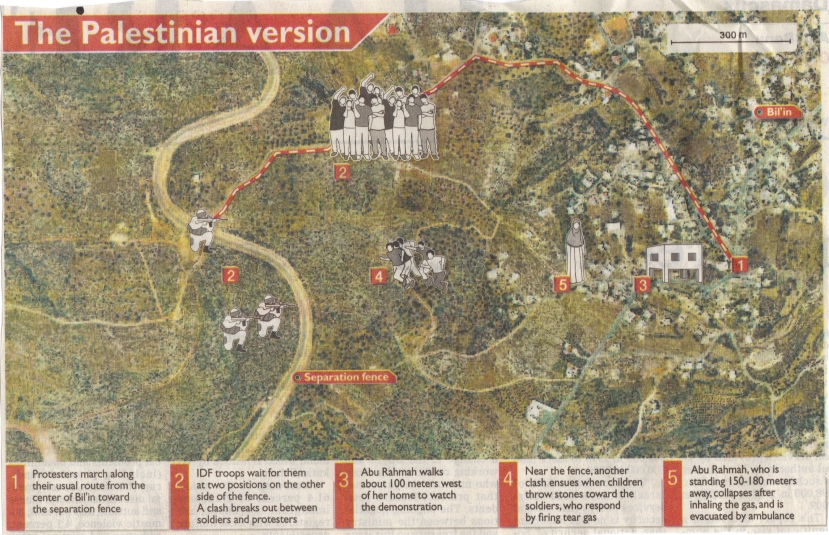 According to this version, Abu Rahma was up to 180 meters away from the tear gas – fired, lets remember, outdoors – which, though not harming any of the protesters who were directly exposed to the chemical, still managed to cause her to collapse and eventually die.

According to the New York City Health Department:

“The effects of tear gas are usually only temporary. Symptoms typically go away within an hour after exposure stops. Effects on skin may take longer to improve….Prolonged exposure to tear gas or exposure to a particularly large amount, especially in an enclosed area, may lead to long-term eye problems (scarring, glaucoma, or cataracts) and may possibly cause breathing problems such as asthma.

The deadly effects of tear gas would only occur following exposure to a dosage several hundred times greater than the amount of tear gas typically used by law enforcement officials for crowd control.

Since Abu Rahma’s burial was undertaken via an accelerated procedure, no post-mortem was performed, and the medical records of her treatment were (to put it mildly) incomplete and contradictory, we’ll likely never know for sure what caused her death.

However, to note that the current Palestinian claims lack credibility is a profound understatement.