Lessons from the York Pogrom of 1190

On March 16th, 1190, which was the Saturday before Pessach (Shabbat HaGadol), the Jewish community of York in northern England was all but wiped out. A small plaque outside Clifford’s Tower where the tragic events took place tells a little of the story.

Memorial plaque at Clifford's Tower in York, which reads: "On the night of Friday 16 March 1190 some 150 Jews and Jewesses of York having sought protection in the Royal Castle on this site from a mob moved by Richard Malebisse and others chose to die at each others hands rather than renounce their faith. Isaiah XLII 12."

Six months prior to that night, two prominent members of York’s thriving Jewish community had made their way to London to attend the coronation of Richard I.

Under the new king’s predecessor the Jews in England had enjoyed a degree of royal protection and Josce (Yosef) and Benedict (Baruch) may have hoped that the gifts they and other Jews from all over England brought to the new monarch would ensure a continuation of that status.

However, anti-Jewish riots broke out in London  during the days of the coronation and some 30 Jews were killed. Benedict was injured during the pogrom, and later died on the journey home.

Like many Jews in their day, Josce and Benedict were merchants – importing wines and other goods from the continent – and money-lenders; a role forbidden to Christians. Some of Benedict’s creditors among the minor nobility of the York region appeared to think that if they could destroy the credit notes, or Shtarrs, their debts would go uncollected and so in March 1190 they organized a mob which attacked and burned down Benedict’s house in York, killing his widow and children in the process.

Benedict’s business partner Josce, seeing the imminent danger, appealed to the warden of the king’s castle in York, Clifford’s Tower to grant protection in the tower to him and his family. That night the mob burned down their house too, and more of York’s Jews came to seek refuge in the castle, mindful of the rioting which had recently taken place in other towns. In the following days, the mob surrounded the castle. The debt-evading nobles had been joined by commoners whipped into a fervor by priests (the church was also in debt to York’s Jews) who branded the Jews as ‘Christ-killers’, exploiting the mood of the time inspired by the preparations for the third Crusade.

The siege lasted almost a week and as food and water supplies ran out and the tower, largely constructed of wood in those days, was set ablaze, the community’s Rabbi, Yom Tov de Joigny – a student of Rabbenu Tam – made a speech in which he declared that it was better to die at their own hands, reminding his listeners of the actions of the besieged at Massada, rather than to submit to the mob’s demands of conversion to Christianity.

Not all of those in the tower agreed, but among those who did, fathers killed their wives and children before being killed themselves by Josce and Yom Tov. When only they remained, Yom Tov killed his friend before committing suicide and thus, according to Jewish law, he was the only one to have transgressed the ruling against suicide. The next morning those who had decided to give up their faith rather than be part of the suicide pact left the castle. They were immediately murdered by the waiting mob.

Eight hundred and twenty-one years later, there is little evidence left of York’s once vibrant Jewish community. The medieval Jewish burial ground at Jewbury now lies under the Sainsbury’s supermarket car park, noted only by another plaque. 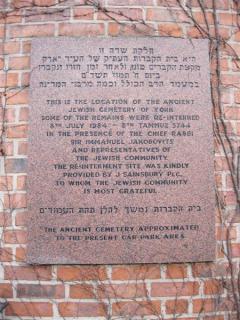 The anniversary of the events in Clifford’s Tower tragic falls this weekend, which is Shabbat HaGadol, and although the Jews of York were far from the only ones to meet their deaths as a result of medieval pogroms in England and much of the rest of Europe, their story has a particular resonance today.

York’s old town still has many medieval buildings; the Minster and many of the street names would be familiar to Josce and Benedict – who lived on Stonegate and Spen Lane – were they to walk there today. On Mickelgate they might come across members of the York branch of the Palestine Solidarity Campaign who meet nearby on Priory Street, including perhaps the Methodist vicar Stephen Leah who is chair of York PSC and known for having rewritten the Christmas carol ‘Oh Little Town of Bethlehem’ with an anti-Israeli theme.

“No ear may hear the outcry,
As Israel’s Wall is built.
While meek souls muse, Apartheid rules –
We speak or share in guilt.”

Dr Leah was also one of the main actors behind his church’s decision to adopt BDS last year, having seconded the motion proposed by Nicola Jones, which was later defended in the Guardian.

“I am a Methodist preacher I’m also the chair of the York PSC. I personally would like to have divestment going a little bit further into the full boycott of Israel, but I know how much I can get away with in the churches sometimes. […] Churches are paranoid about being critical of Israel sometimes, they want to be balanced all the time, we must put pressure on church leaders.’’

In fact, our 12th century visitors to modern York might not be in the least bit surprised to discover the close links and co-operation between some members of the contemporary clergy in the Methodist and Anglican churches – not to mention the newly boycotting Quakers  – and others acting out of more earthly, political motives in spreading and promoting anti-Jewish sentiment. After all, it was not very different in their day when politics, religion and common or garden hatred combined to produce such tragic results.

The rest of us, however, might have hoped and (given that York was far from an isolated event) expected that 800 years after York’s Jews found that they could not rely upon the king for protection, the concept of Jews defending themselves might be rather less controversial than it still is. We might also ask ourselves if those such as Sabeel and PACBI, who demand that the Jewish State voluntarily dismantle itself in favour of a bi-national one, are really so different from the crowds who demanded that the Jews of York convert or be killed, and what became of those promises of survival.