Campaigning for truth about Hamas

This is cross posted at Richard Millett’s Blog

Passers-by in Golders Green studying pictures and the petition.

On Sunday a small group of activists took to the streets of Golders Green to launch a new organisation called Campaign For Truth (www.campaign4truth.org).

The aim is to Petition the BBC to report the full nature of organisations that have adopted an agenda of genocide against another people.

Hamas has adopted such an agenda. Its Charter expressly calls for the killing of Jews.

Yet, when the BBC reports on Hamas it uses phrases like “the Palestinian militant group Hamas” (see here) ” or “Israel regards Hamas as a terrorist organisation” (see here).

It states Hamas to be one “of the two main Palestinian factions” (see here) or it states, somewhat euphemistically, that “when Hamas won an election back in 2006, they kicked Fatah out of…Gaza” (see here).

And to state “Israel regards Hamas as a terrorist orgnisation” is playing somewhat loose with the truth. It is listed by America and the EU as being a terrorist organisation.

As is stating “Hamas kicked Fatah out of …Gaza”. They murdered them out of Gaza. They tied Fatah activists hands behind their backs before shoving them head first off the tops of buildings.

How Fatah can now reunify with Hamas after having been so brutally dealt with by them is beyond me.

Fatah are obviously feeling the backlash after Palileaks exposed their negotiations with Israel. They know that any Palestinian that agrees a peace deal with Israel will find themselves swinging by a Hamas rope in the middle of the nearest Palestinian town square.

But I was amazed when on May 4th a Channel 4 newsreader, not Jon Snow, read out that the Hamas Charter is dedicated to the destruction of Israel.

Shouldn’t that be the form adopted by the BBC; to tell the licence payer what Hamas actually stands for? I cannot see Auntie Beeb declaring, while everyone is having supper, that Hamas desires to kill Jews but, as with Channel 4 News, stating that Hamas is dedicated to the destruction of Israel must, surely, be a minimum.

And on BBC Radio 5 Live the day after bin Laden was killed even David Cameron gave an interview showing just how out of touch he is with the true nature of Hamas. He said there are three things necessary for “a more peaceful world”:

1. Get bin Laden and roll up Al Qaeda.
2. Make sure the Arab Spring is a success and
3. Bring a historic peace deal between the Palestinians and the Israelis. (listen here: )

So while it is ok for Britain and America to “get bin Laden and roll up Al Qaeda” Israel has to keep its own civilians under constant fear of terror by signing a deal with Hamas, an organisation that simply wants all Jews dead. An organisation that expresses a desire to kill Jews does not want peace. Hamas is Israel’s Al Qaeda and should be dealt with as such.

If Cameron wants “a more peaceful world” it will be one without both Al Qaeda and Hamas in it. To talk of a historic peace deal between Israel and the Palestinians without mentioning the true nature of Hamas is nonsensical.

But getting back to the signature collection last Sunday, at first I was a bit sceptical but there was a real apetite by many passers-by to express their disgust at the BBC’s leniency towards Hamas by signing the petition. Many also expressed there disgust at Channel 4′s The Promise.

Meanwhile, the petition should soon be online and there will be further street signature collections.

Another signature for the BBC. 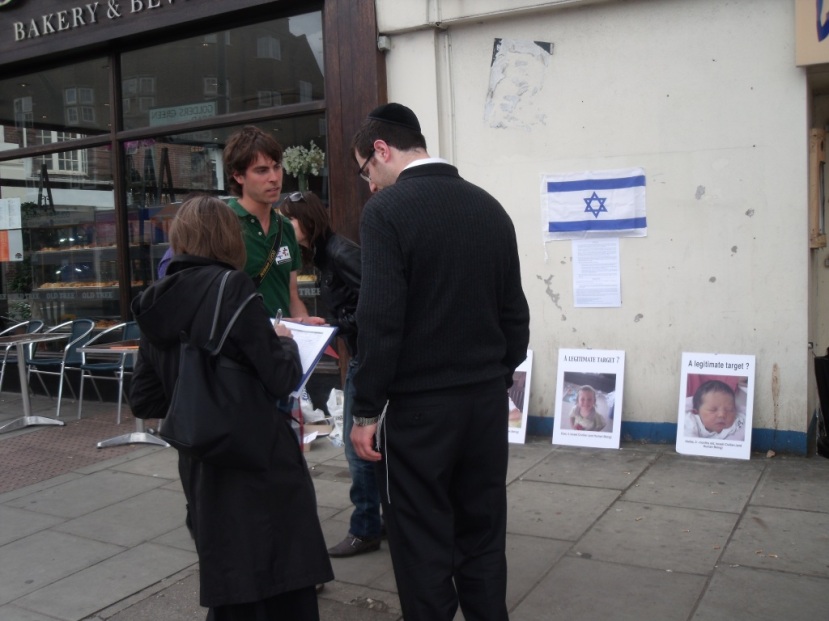 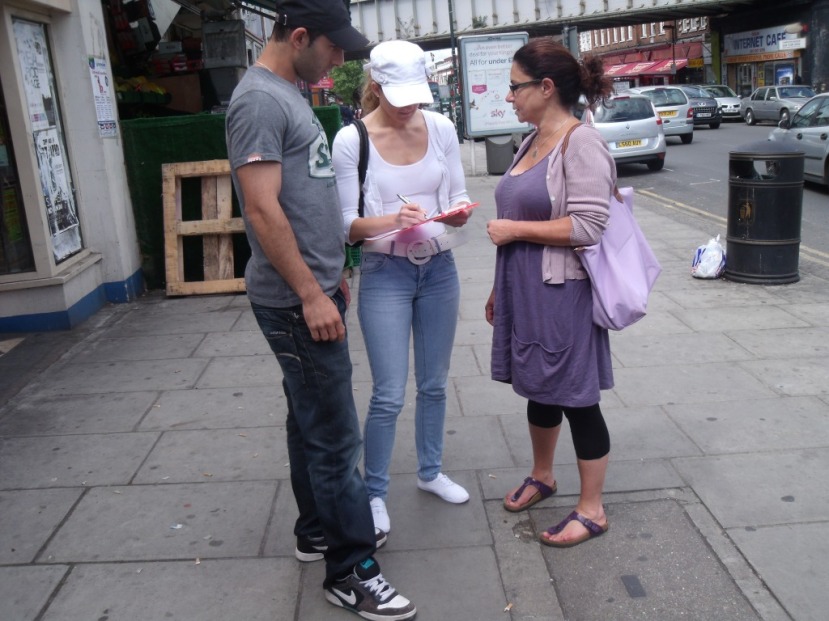 The Fogel children who were murdered while in bed by Palestinian terrorists.