Israelinurse contributed to this report

Several Syrian rioters, marking the 44th anniversary of the Arab “downfall” in the Six Day War (Naksa Day), were injured today when hundreds attempted to breach Israel’s northern border with Syria in the Golan Heights, near Majdal Shams. And, while Syrian authorities were claiming several fatalities, the IDF was unable to confirm this.

Israel’s Channel 2 is reporting that five bus loads of protesters at Majdal Shams were bused in from the Yarmouk refugee camp near Damascus, where the Syrian security forces have full control.  Further reports suggest that Syrian soldiers present in the area made no effort to stop people getting to the border and even engaged in provocation.

“We issued warnings for them to stop advancing. When they continued, we fired warning shots in the air,” said an IDF spokeswoman

When the demonstrators continued toward the Israeli fence, they said, shots were fired at their feet. “We know of 12 injuries,” she added.

IDF forces were sending Arabic-language messages through loudspeakers over the border, warning that anyone approaching the fence would be stopped.

Below is a warning issued by the IDF to rioters approaching the Syrian-Israeli border near Majdal Shams:

Video of the warning:

Reliable IDF sources have informed us that, during the confrontations, the International Red Cross requested that the IDF hold their fire so Red Cross personnel could safely evacuate those injured, a request honored by the IDF.  However, the rioters took advantage of the cease-fire and continued storming the fence.

Though the Syrian media is reporting several fatalities, there is no independent confirmation of such reports, and the IDF spokesperson I talked to seemed skeptical that the injuries sustained by Syrian protesters could result in fatalities.

A second demonstration took place on the Syrian border in Kuneitra, where 200 to 300 demonstrators amassed.  Syrian protesters there hurled molotov cocktails towards IDF positions, but there are no reported injuries and the riots were successfully contained.  Of note, there were no sign of the UN forces yet again – despite the fact that the Kuneitra demos were meters from their camp.

Elsewhere today, hundreds rioted near the Qalandiya checkpoint north of Jerusalem. The Protesters were hoisting signs reading “A million shahids are marching in Jerusalem,” “The people want and end to occupation,” and “occupation is illegal,” and clashed with Border Guard forces, stoning them. A reporter from Israeli Channel 2 says there were 100-200 demonstrators at Qalandiya but stresses that most are members of NGOs rather than ‘authentic Palestinians’.

The IDF was able to use tear gas and other non-lethal methods to successfully disperse the crowd.  One Border Guard officer suffered mild injuries.

Finally, in Beit Hanoun, Gaza, this morning there were a few dozen rioters who approached the Israeli border but the situation was soon brought under control, by around noon, no injuries were reported and the fence was not damaged.

Regarding the incidents on the Syrian borders, IDF officials were certain that the Syrian regime initiated the incidents in order to divert attention to the regime’s increasing brutality on Syrian civilians protesting the rule of Bashar Assad. 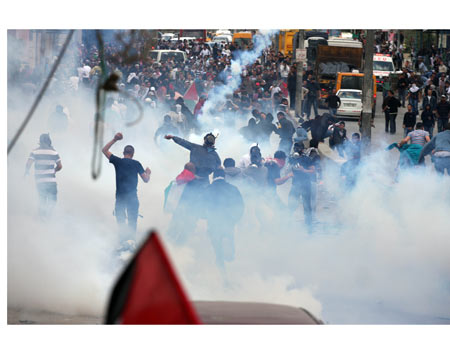