This is cross posted by Simon Plosker, the Managing Editor of Honest Reporting. The essay originally appeared in Ynet 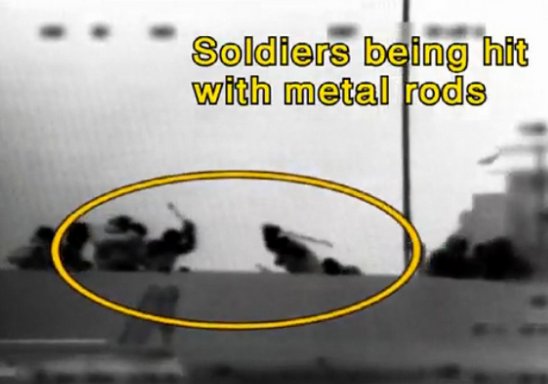 “We are in a battle, and more than half of this battle is taking place in the battlefield of the media.” So said Al-Qaeda’s new leader Ayman al-Zawahiri in November 2005. But what happens when the media attempts to define the physical battlefield by becoming active participants in the story?

We should all be extremely concerned by the announcement that among those sailing on the imminent flotilla to Gaza are journalists representing mainstream media, including the New York Times and camera crews from CNN and CBS.

This is a clear example of the symbiotic relationship between the media and anti-Israel agitators such as those behind the flotilla. After all, it wasn’t the violent actions of the passengers on board the Mavi Marmara that caused Israel so much damage – it was the diplomatic and public relations fallout from an incident that occupied the international press for days after the event.

The “martyrdom” of nine Turkish passengers constituted a PR success for the IHH organization and its cohorts. Clearly then the only reason the mainstream media would jump on board the next flotilla would be the prospect of capturing a repeat performance. Likewise, the flotilla’s organizers are counting on the media to publish a story whose narrative has already been written – namely that of some plucky “peace activists” attempting to break a brutish and illegal naval blockade of the poor Palestinians in their open-air prison.

Imagine that the Israeli Navy boards the flotilla’s ships one by one, forcing the vessels to dock without incident for inspection in an Israeli port. This would be the ultimate failure on the part of the organizers to create a major incident as well as for the media on board who hope to be on the scene reporting on the biggest news story of the day.

Having established that both the flotilla participants and the accompanying media need each other, can we honestly count on the New York Times, CNN and CBS as well as other “embedded” journalists to report on the situation with objectivity even if the story doesn’t turn out to be as dramatic as they would hope?

Or will the mere presence of the media act as an invitation for confrontation and potential violence as so-called “activists” play for the cameras? And what of the journalists themselves? While over the years, some reporters have been inadvertently killed or injured by the IDF, we cannot expect soldiers entering a potential warzone, as the Mavi Marmara became, to run the added gauntlet of avoiding media personnel who have purposely positioned themselves in the crossfire. It not only risks the lives of the journalists but also those of Israel’s soldiers.

The Israeli government closed off access to the Gaza Strip for journalists during Operation Cast Lead, ostensibly for their own protection and to spare IDF troops from yet another factor outside of their control on the battlefield. There was a valid argument that this worked against Israel’s interests. The media, camped on a hilltop overlooking Gaza, was antagonized and vengeful while the images from Gaza itself were dominated by al-Jazeera and other less than objective sources.

This time, Israel would do well to remind those journalists on board the flotilla that they will be active participants in an illegal attempt to break what is a legal naval blockade under international law.

We can only hope that the mainstream media will not be influenced by the ideologues and “useful idiots” that make up the disparate groups on board, whose dominant zeitgeist is a hatred of Israel rather than a love of universal human rights. We will have to rely on the professionalism of the journalists to capture the reality of what occurs free from the prejudice that colors so much of the reporting on Israel.

Based on previous experience, however, we shouldn’t have high expectations. This ship has sailed. Will Israel be left clinging on to flotation devices, drowning in a sea of negative publicity or will this be a fishing expedition in calm waters?

The flotilla is sailing. It’s time to baton down the hatches once again.