Round-up and analysis of terrorist attacks near Eilat

This is cross posted by Marc Goldberg at Marc’s Words

Now that the dust has begun to settle more facts about this attack have come to light. So far there are 9 dead Israelis and 30 wounded.

A total of 7 of the perpetrators were killed by security services, 5 of them by Israelis and 2 by Egyptians.

What has also become clear is that Israel actually got off lightly considering the number of terrorists involved (claimed to be 15-20). Their objective may have been to kidnap a soldier or civilian and spirit him/her back to Gaza.

Israel had received intelligence that a major attack was about to be launched by the Popular Resistance Committees (PRC), a group affiliated to, but not a part of Hamas. Acting on this intelligence Special Forces units Yahsar Golani and the police’s SWAT team YAMAM were already in the area, accounting for their speedy response. Fighters from the YAMAM actually crossed into Egypt briefly after being attacked from the Egyptian side of the border. They killed 2 terrorists and quickly returned.

There is a timeline of the attacks here.

The attacks began with a terrorist squad opening fire on a bus injuring 10 people. They then opened fire on a car killing four people, one of the squad opened fire on an empty bus and detonated his suicide belt killing both himself and the driver. Then a squad from the Golani infantry Brigade arrived on the scene killing one of the two remaining terrorists only to be hit by gunfire from the lone remaining terrorist who then fled the scene.

At 19:00 local time there is more shooting from the Egyptian border with one fighter from the YAMAM reportedly seriously wounded and transported to hospital.

Today’s terror attacks in Israel show a worrying level of proficiency on the part of the perpetrators.

Not only did they carry out their initial attack successfully but, as this report of events shows, had correctly assessed Israeli counter measures and eliminated them also. Though in all probability the quicker than usual response of beefed up Israeli combat units thwarted the attackers in achieving their goal of a more prolonged operation and a kidnapping.

“Later a suicide bomber detonated his explosives belt, and another terrorist opened fire at IDF forces that arrived on the scene. According to [GOC Southern Command Major-General] Russo, two operatives were shot and killed over the border fence, and it appears that Egyptian forces killed two others on their territory.”

So first the attack and then an ambush of responding IDF forces. There are a number of details the terrorists would need to have in order to plan such an operation. First the bus times and route, the IDF response to an attack, including where the nearest military base was and the likely size of the force that would be sent to investigate. They also would have needed to know the border patrol operations on both sides of the fence in order to overcome them to get the force consisting of a suicide bomber(s) as well as at least one other person to set up the explosives that were later found and diffused by the IDF.

The second attack, which rescue services said was on a passenger car, happened close to the site of the earlier ambush.”

This kind of attack hasn’t been seen in Israel for a long time, it serves as a reminder to the 1950’s before UN peacekeepers were sitting on the border. It can’t help but be viewed in context of the changed reality along the Egyptian Gaza border now that the new regime has made it easier for Palestinians to cross over into Sinai from Gaza.

There are ways that this could go from bad to worse and really it depends on the Egyptian response. Should the Sinai descend into a terrorist playground there will be more attacks and a high likelihood that at some point the IDF will cross into sovereign Egyptian territory to intervene. In a more substantial way than happened during the attack yesterday.

The Israeli response was swift and effective, a base used by the PRC was bombed killing (according to Ha’aretz):

“several high-ranking members including: Kamel Nirab, the head of the PRC; Imad Hamed, the person responsible for its military activity in Gaza; Khaled Shaath, a leading member of the PRC’s military wing who was involved in rocket attacks on Israel; and Khaled Masri, who was involved in kidnapping soldier Gilad Shalit in 2006. The Shin Bet security service suspects that Hamed is the one who planned yesterday’s attack near Eilat.”

The Egyptians have poured large numbers of forces into the Sinai in an effort to wrest control of the area away from various militant groups. The number of forces is unclear at the moment though it is thought to be over 1,000 soldiers and includes armoured vehicles.

The additional forces were sent in there before the attack yet clearly have not, as yet, been able to pacify the area completely. The number of Egyptian military units currently in the area is actually higher than that agreed upon in the Camp David peace talks of 1978 though Israel has consented to the higher numbers of Egyptian security personnel in the area. 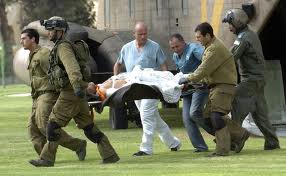