What the Guardian won’t report: Palestine will be Jew-free

But if you’re a Guardian reader you’d never know this. Instead you’re treated to more stories beating the drums of war in support of Palestinian statehood. Here’s a snapshot of the Israel hate page on the Guardian at the time of writing: 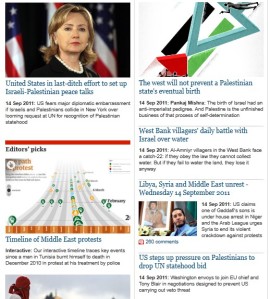 Now try a little thought experiment and imagine what the Israel hate page would look like on the Guardian if an Israeli official were to say that Israel should be free of Arabs or Muslims.

Meanwhile over at the Guardian’s sister publication in Israel, Ha’aretz, Elder of Ziyon reports that Ha’aretz amended its headline on this story to make the PLO sound less antisemitic.

Ha’aretz is so heavily invested in the false meme that the Palestinian Arab leadership wants to have peace with Israel that they couldn’t stomach that original, accurate headline that showed that their idea of “peace” is the ethnic cleansing of all Jews from “Palestine.”

A Ha’aretz editor decided to tone it down, so as not to offend the delicate sensibilities of Ha’aretz readers who have come to expect a certain kind of news that conforms to a pre-existing viewpoint.