Back on Oct. 3, a Guardian report about an arson at a mosque in Israel included this headline.

In the first passage, we learn who the culprits of the arson most likely were, despite no definitive claim of responsibility:

“Arsonists torched a mosque in an Arab village in northern Israel Monday, setting off protests by residents who clashed with police. Graffiti sprayed at the site suggested Jewish radicals, suspected in other recent mosque fires, were involved.”

On Dec. 25, however, a Guardian’s story about a series of deadly terror attacks against Christians, targeting Nigerian churches on Christmas day, which resulted in dozens killed, avoided any mention of the perpetrators in both the headline and sub heading. 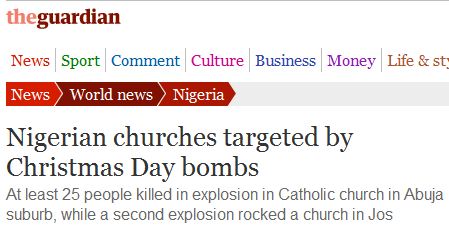 The above headline is even more interesting in light of the fact that the first passage in the story notes immediately that the “Christmas Day bombs” didn’t target the churches without assistance:

“A militant Islamist group [Boko Haram] has claimed responsibility for a series of co-ordinated attacks on Christmas Day services at churches in Nigeria, one of which killed at least 35 people.”

Further, a proper contextualizing of the attack would necessarily include the fact that Boko Haram is a Sunni Islamist movement, and that Sunni extremists, per the U.S. National Counter Terrorism Center’s (NCTC) website, were responsible for approximately 70% of all terrorism related deaths worldwide (9,092 out of 13,186) in 2010. (A good summary of the official U.S. report can be found here)

In contrast, Christian extremist groups were responsible for 321 terror related deaths in 2010 worldwide.

The remaining attacks were committed by secular, political, or anarchist groups.

Here’s a graph (from the NCTC)  you’ll never find among the Guardian’s ubiquitous charts, graphs and “interactive” maps. 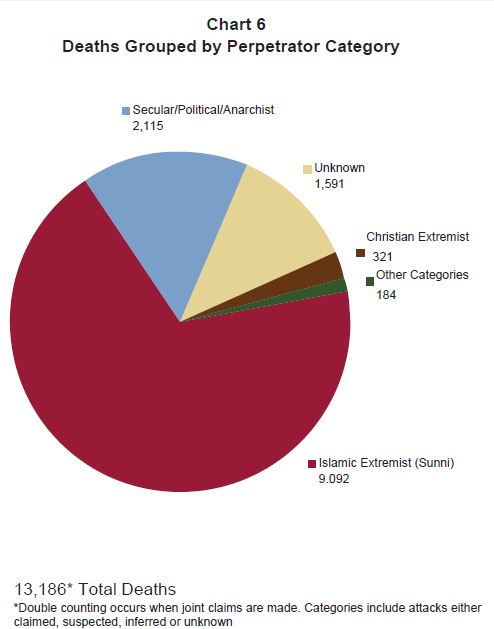