Why is the ‘liberal’ Guardian still rooting for a reactionary antisemitic Islamist named Raed Salah?

The Guardian’s infatuation with Raed Salah is not new. When the story of his arrest in the UK  broke last year, the paper produced a plethora of articles, all eerily similar in their support for Salah and his British patrons and in the whitewashing of who Salah is (the various articles  uniformly described  him as a ‘Palestinian activist’) and what he stands for.

The Guardian’s Ian Black went so far as to describe the organisation its cause celebre heads in the following anodyne terms:

“The Islamic Movement campaigns for the rights of those citizens who refer to themselves as the “Arabs of 1948″ – those left behind while 700,000 others became refugees when Israel was founded. It fights discrimination and campaigns for the right of Palestinian refugees to return, as well as against house demolitions and expulsions in Jerusalem.”

Notably, the Guardian failed to report the fact that Raed Salah lost an appeal against the deportation order in October 2011.

Now however, in the wake of the recent decision by the UK immigration tribunal judge, the Guardian is back on the case, with two articles (so far) on the subject in one day.  Along the way, the Guardian did not miss the opportunity to lash out once again at the CST, quoting David Miller and apparently having learned little from the last time it relied upon information provided by that known purveyor of outlandish conspiracy theories .

There are many reasons why a newspaper which likes to describe itself as both ‘Left’ and ‘liberal’ should not be trumpeting the cause of the leader of a religious ultra-nationalist movement which practices ethnic separatism, sex segregation and suppression of the rights of homosexuals, women and religious and ethnic minorities.

One of those reasons is that Raed Salah and his Northern Islamic Movement stand for everything which the liberal Left supposedly abhors. But the Guardian’s puerile ‘my enemy’s enemy is my friend’ stance means that it is dazzled by the fact that Salah is feted in anti-Israel circles as a leading ‘activist’, and so it is prepared to sell out its once firmly held Leftist and liberal principles and avoid exposure of Salah’s real background and agenda at all costs.

In 2003 the Or Commission – appointed by the State of Israel to investigate the riots of October 2000 in which 12 Arab Israelis, one Jewish Israeli and one Palestinian were killed – published its report.

“..thousands of demonstrators paralyzed the country, destroying Jewish property and attacking Jewish citizens on Israel’s main roads. In a number of instances Jewish citizens were just inches from death at the hands of an unrestrained mob.” One elderly Jewish man, Jan Bechor, was stoned to death as he sat in his car at an intersection on one of Israel’s main roads. The report also documented the use of firebombs, gunfire, rocks, and slingshots against both Israeli citizens and police.”

The report noted the incitement within the Arab sector which preceded the deadly riots:

“Salah reportedly told the crowd, “the Islamic world has exclusive rights to all the holy sites in Jerusalem and Israel has none.” The crowd responded with the chant, “In spirit and blood, we shall redeem Al Aksa.” Islamic affairs expert Dr. Guy Bechor noted that the entire rally took place as an act of incitement against the very existence of the State of Israel.”

The Or Commission did not recommend legal action against Raed Salah – a move which was severely criticized across the Israeli political spectrum.

“Former Defense Minister Moshe Arens wrote in Ha’aretz, “It is difficult to believe that the Or Commission ignored the rapid rise of subversive activities and incitement against the state that occurred among a part of Israel’s Arab community since the Oslo Accords.” Druze MK Ayoub Kara said, “Israel must stop ‘touching up’ an ugly picture: the Israeli Arabs engaged in a civil rebellion to demonstrate their national solidarity with the Palestinians.”

Far from being the type of ‘human rights’ or ‘civil liberties’ movement as Ian Black suggested in his article quoted above, the Northern Islamic Movement is in fact the Muslim Brotherhood’s branch in Israel.

In 1997 it created controversy by attempting to build an unauthorized mosque on church-owned land outside the Basilica of the Annunciation in Nazareth. A year later it gained control of the local council and Christian residents of the city and visitors to it are still confronted by Islamist propaganda as they approach their holy sites. 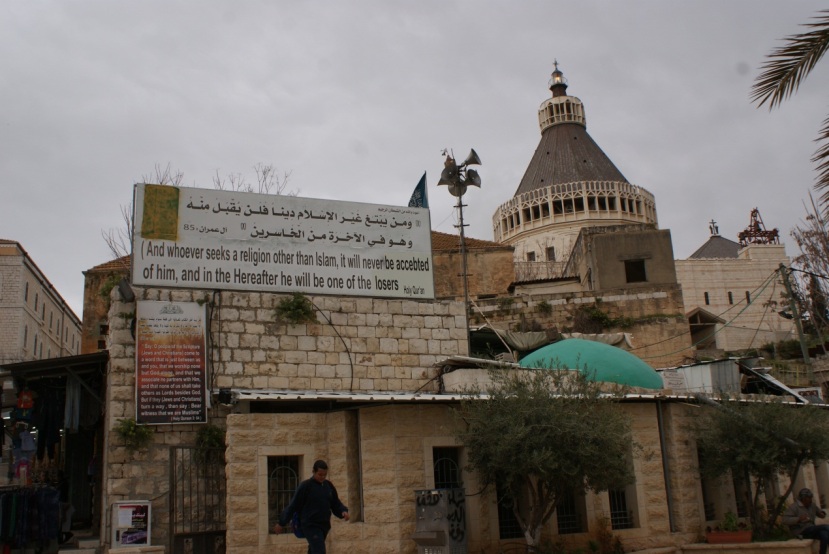 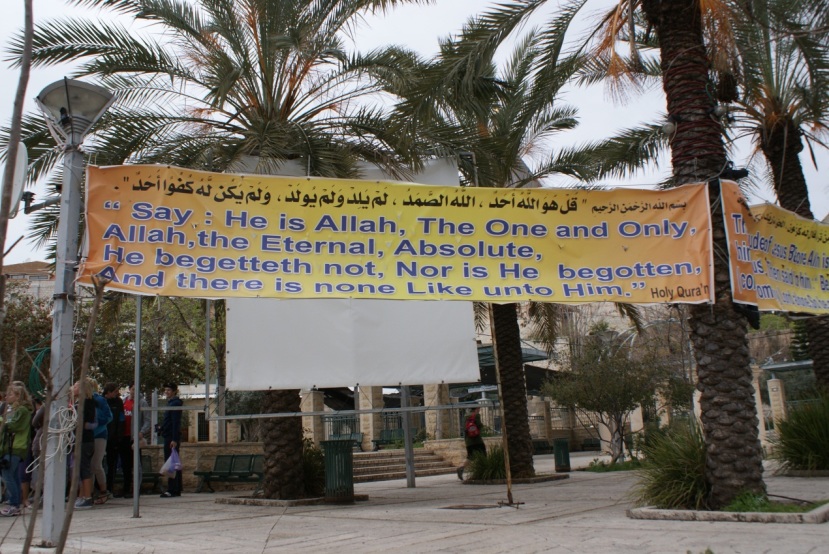 Like its sister organization Hamas – also a branch of the Muslim Brotherhood – the Northern Islamic Movement rejects the existence of Israel completely and advocates the establishment of an Islamic state run on Sharia principles in its place.

Raed Salah’s ‘activism’ must be examined by any objective observer in that context, rather than in the cherry-picking manner adopted by those who choose to present him merely as a pro-Palestinian activist.  Their support of Salah and, by extension, his movement’s aims is in fact support for an aspiring non-democratic theocratic regime with in-built persecution of minorities and discrimination against numerous sectors, not least moderate Muslims.

As cited in the Or Commission report, Raed Salah is well known for his ability to incite violence, conflict and unrest either through his signature rabble-rousing speeches or by other – sometimes imaginative – methods. Here he is speaking at a rally after his participation in the Mavi Marmara flotilla, glorifying ‘martyrdom’.

Salah’s support for Hamas and its genocidal aims is not, however, confined merely to inflammatory rhetoric and boat trips. Its practical side includes the Northern Islamic Movement’s links to terror attacks.

“Nonetheless, three terrorist attacks have been carried out during the past decade by members of the Islamic Movement, primarily by its radical faction: The murder of soldiers near Kibbutz Gal-Ed in 1992; the murder of an Israeli couple in the Meggido Forest in August, 1999; and the explosions of the bomb-carrying cars in Tiberias and Haifa in September, 1999.”

Whilst the Northern Islamic Movement may not have provided the logistic support for these terror attacks (that apparently came from Hamas) it certainly did provide the background atmosphere to them.

“Members of the extremist faction maintain contacts with HAMAS in the Territories. Dr. Saliman Aghbariyya, an activist in this faction from Um el-Fahm, has been arrested more than once for having financial connections with HAMAS. Sheikh Ra’id Salah, leader of the extremist faction, is a member of the board of governors of the Islamic University in Gaza; the most important stronghold of the HAMAS in terms of organization and education. Sheikh Ra’id rushed to Jordan, at the head of a mission, to congratulate Khaled Mash’al for surviving an attempt on his life by Israel’s Mossad in September 1997. Similarly, he and his supporters went to Gaza to congratulate Sheikh Ahmed Yassin, the leader of HAMAS, upon his return home after being released from prison in Israel.”

As is well known, Raed Salah has spent time in prison in Israel due to his role in the transferal of funds to Hamas. That, of course, is no coincidence: Salah has been named as sitting on the board of trustees of Yusuf Qaradawi’s ‘Union of Good’, the raison d’etre of which is to provide financial support for Hamas. On the basis of that support to a terrorist organisation, the ‘Union of Good’ was outlawed by the United States and by Israel – along with its various supporting charities.

Several of those supporting charities are based in Britain and, despite repeated public pressure, continue to function openly; rubber stamped by the Charity Commission of England and Wales.

Raed Salah’s 2011 speaking tour of the UK (cut short by his arrest) was promoted by the Palestine Solidarity Campaign and the Palestinian Forum in Britain. The advertisements show that it was also a fundraiser for ‘Human Appeal International’ which is one of the members of the ‘Union of Good’.

‘Human Appeal International’ was named in the trial of Ahmed Salatna of the Jenin Zakat Committee as one of the organisations via which funds were transferred for Hamas and Islamic Jihad terrorist activities.

Raed Salah’s supporters (the Guardian included) in the UK have tried very hard throughout the entire affair to confine discussion of the case to semantic wrangling over his anti-Semitic statements and A-level English Literature-style dissections of his ‘poetry’. In that, they appear to have largely succeeded.

That ‘victory’ should, however, send chills down the spines of any genuine members of the liberal Left remaining in the UK. By focusing the public and legal discussions on the various interpretations of Raed Salah’s sermons and writings, interested parties have managed to create a smoke-screen of ‘Jewish over-reaction’, with an added measure of anti-Semitic conspiracy theory-style ‘untoward Jewish influence’, adding fuel to the fire of an already intimidating atmosphere as perceived by many British Jews and non-Jews alike.

But the ins and outs of British immigration law and Salah’s so-called poetry should – in theory at least – be of far less interest to Left liberal commentators than the fact that there are groups within their own society (some with members in very high places) who laud and support a man whose beliefs and ideas are the antithesis of the values of liberty, equality and human rights which Western liberals claim to embrace.

It is possible to agree or disagree with the principle behind Salah’s banning from the UK, but there is certainly no reason for any genuine liberal to invest as much energy as the Guardian has done into trying to disguise the fact that the aim of his visit was to spout his incitement, promote his ideas of theocratic-based separatism and do a bit of round-about fundraising for a terror organisation on the side.

The Guardian’s treatment of the whole protracted Salah affair shows how meaningless a term ‘Left liberal’ has become in the ‘progressive’ circles it inhabits. But that writing was on the wall right from the beginning of the saga when a Guardian editorial on the subject informed us that “[i]f the home secretary is unwise enough to start applying her “prevent” policy to all Palestinian activists Israel has a problem with, Britain will face a backlash in the Arab world.”

And that is precisely the trouble with the Guardian’s Israel obsession: it blinds it from seeing the world – and its own little corner of it – in focus and causes it to sell out the principles to which it – and too much of the liberal Left – used to once adhere.