Jewish Ideas Daily commemorates the forty-fifth anniversary of the Six-Day War with a day-by-day synopsis, for which we are indebted to Michael Oren’s comprehensive Six Days of War.

After five days spent battling Arab forces, Israel now faced a new opponent: time. With the Egyptians and Jordanians out of the war on day four, and the Syrians having agreed to a ceasefire, the Security Council was becoming restless.

General David Elazar’s forces would have only a few hours to take the strategically important Golan Heights.

By dawn, Elazar had made little progress, and thinking that a ceasefire was imminent, despaired of reaching his objectives. But then he received a telephone call from Rabin: the government had not yet committed to a ceasefire; he would have more time. 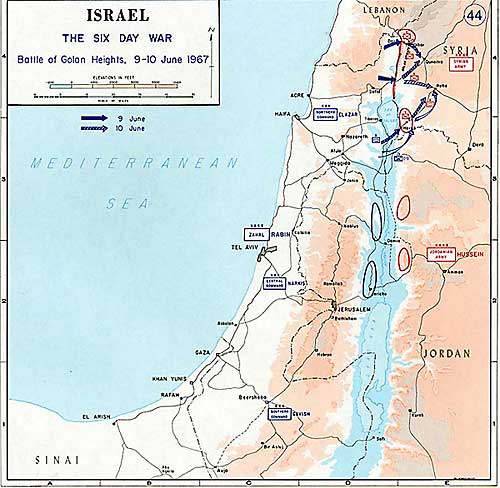 Granted this reprieve, Elazar rallied his men and redoubled the assault. But now—to his astonishment—the Syrian resistance evaporated. At the village of Mansura, they found empty tanks; at Banias, the trenches were deserted. While Quneitra remained in Syrian hands, Radio Damascus was nonetheless broadcasting its capture.

Mistrusting their Arab allies, the UN, and, most of all, the Soviets, the Syrian government had given up on a ceasefire and ordered a full scale retreat. By announcing the fall of Quneitra, they had their pretext for consolidating their troops around Damascus. Indeed, the leadership did not feel safe even there: first the general staff, then the ministers fled the capital for Aleppo.

But the Soviets had not yet given up on their Arab protégés. The Kremlin formally broke diplomatic relations with Israel and gave the White House an ultimatum: “We propose that you demand from Israel that it unconditionally cease military action . . . We propose to warn Israel that if this is not fulfilled, necessary actions will be taken, including military.” The White House issued a verbal response that the USSR should place similar pressure on Syria; but to make sure the message got through, President Johnson ordered the Sixth Fleet, sailing west of Cyprus, to turn back east to within a hundred miles of Israel’s coast.

Having dealt with the Soviets, Johnson set about following their advice. At the UN, the the American Ambassador, Arthur Goldberg, met with the Israeli Ambassador, Gideon Rafael, telling him that “the United States government does not want the war to end as the result of a Soviet ultimatum. This would be disastrous for the future not only of Israel, but of us all. It is your responsibility to act now.”

The message from Washington came back to Jerusalem and on to Elazar at the front: Eshkol and Dayan would give him until 2 p.m. to finish the job, before agreeing to a ceasefire. Quneitra, completely deserted, fell at 12:30 p.m. But the advance was still too slow; the retreating Syrian army had littered the roads with heavy equipment, hindering the Israeli offensive. Moreover, Elazar coveted Mount Hermon, with its panoramic views of Damascus.

Yet Dayan was not out of tricks yet. He had arranged ceasefire talks with the chief UN Observer, Norwegian General Odd Bull, in Tiberias; but when Bull arrived, he found that the meeting had been moved to Tel Aviv. The two finally met at 3, and set the ceasefire for 6 p.m. But Dayan issued Bull a condition: no UN observers were allowed near the ceasefire line. Thus the war was already over when, the following morning, an Israeli helicopter crew made it to the summit of Mount Hermon and planted its flag.

The fighting was over, and the Great Powers were appeased; but between Israel and her Arab neighbors, the tension was hardly defused. Egypt, Jordan, and Syria had all lost territory, military hardware, and men—in Egypt’s case, between ten and fifteen thousand. Despite her stunning victory, Israel had also suffered casualties, with some eight hundred dead, and two and a half thousand wounded. With no desire to fight again, on June 19th, Eshkol’s cabinet decided—albeit by only one vote—to surrender the Sinai and the Golan in exchange for peace.

But the Arabs were hardly amenable to reconciliation. Meeting on September 1st at Khartoum, the Arab League summit issued a resolution affirming that peace with Israel was too high a price to pay:

“The Arab Heads of State have agreed to unite their political efforts at the international and diplomatic level to eliminate the effects of the aggression and to ensure the withdrawal of the aggressive Israeli forces from the Arab lands which have been occupied since the aggression of June 5. This will be done within the framework of the main principles by which the Arab States abide, namely, no peace with Israel, no recognition of Israel, no negotiations with it, and insistence on the rights of the Palestinian people in their own country.”

The Arab League’s commitment to the rights of native peoples did not extend to Jews born in Muslim lands. The World Islamic Congress, meeting in Amman later that month, declared:

“Jews of Arab Countries: the Congress is convinced that Jews living in Arab countries do not appreciate the kindness and protection that Muslims have granted them over the centuries. The Congress proclaims that the Jews who live in the Arab states and who have contact with Zionist circles or the state of Israel do not deserve the protection and kindness that Islam grants to non-Muslim citizens living freely in Islamic countries. Islamic governments must treat them as enemy combatants. In the same way, Islamic peoples must individually and collectively boycott them and treat them as mortal enemies.”

Pogroms followed in Tripoli, Tunis, and Baghdad; across the Islamic world, Jews abandoned their ancient communities—many fleeing to Israel. In Egypt, the persecution began during the war. A Jew in Cairo, Benjamin Melameth, recalls being arrested on the first day of the war and systematically beaten:

“All this time officers were walking up and down whipping us with their branches of palm trees,and some of them ran and jumped on our shoulders. Anyone who lost their balance or who flinched received a rain of blows . . . . When the turn of the Rabbi of Alexandria arrived, they crucified him to the bars of the front door of the prison. Then they beat him until he lost consciousness.”

Yet it was the plight of the Arabs of Gaza and the West Bank which captured international attention. Forty-five years on, with the Palestinian question still unresolved, the received wisdom holds that the Six Day War was, in hindsight, a defeat for Israel.  The Economist called it “one of history’s Pyrrhic victories,” stating that “in the long run, the war turned into a calamity for the Jewish state no less than for its neighbors.”

Der Spiegel was even more explicit, with a hint of guilty pleasure:

“But Israel still pays the highest price today in the Palestinian territories. The state that has its roots in the bitter experiences of 2,000 years of persecution had, in fact, subjugated another people itself. An army that had been established for the purpose of defense suddenly found itself in the role of an occupier.”

But to see victory as a worse outcome for Israel than defeat is to forget that Israel fought the war just to survive; victory was the only option. As Moshe Dayan’s daughter, Yael, wrote in the Daily Telegraph just a year after the war:

“A year ago I was in uniform with a division on the Egyptian border. We, in the front, had no doubt as to the inevitability of war. We also knew we were going to win it. We were not going to win because we were more numerous, more battle-happy, or more ambitious. We were going to win, at whatever cost, because losing meant extermination . . . . These obvious facts should be remembered, simply because we were victorious. When a David wins, he stops being David in a way, and his motives become suspect. On June 5, 1967, we risked all we had.”

If Israel exchanged the sympathy of a beleaguered minority for the moral dilemmas of a majority in 1967, it is only because peace with her Arab neighbors was impossible. To quote Yael Dayan again: “If our face is changed, it is only because security and peace did not prove to be synonymous and we have chosen the first, are not offered the second, and have to live with the results.”