More equal than others: ‘Comment is Free’ contributor Mehdi Hasan is not a victim.

We, of course, can’t see into Mehdi Hasan‘s soul.

As such, we will then never know for sure what he was thinking when he blamed the rise of antisemitism on Israeli actions, rather than on the antisemites who target innocent Jews. Nor will we ever truly understand with certainty why he singles out the Jewish state (and no other state) as unworthy of existence within any borders.

However, we can assume it didn’t occur to the former New Statesman political editor how hypocritical it is for him to complain (in a ‘Comment is Free’ essay titled, We mustn’t allow Muslims in public life to be silence, July 9) that you can “say things about Muslims in polite society…that you cannot say about any other group” while himself rationalizing the hatred of Jews, and negating the rights of Jewish self-determination.

And, we’ll also never know for sure what was in Hasan’s heart when he claimed (below) that “the kaffir, the disbelievers, the atheists who remain deaf…to the teachings of Islam [are] people of no intelligence”, [like] “cattle,” and another suggestion that non-believers “live their lives like animals”.

However, we can assume it didn’t occur to Hasan that such demonization of non-believers would undermine his complaint (in the same ‘Comment is Free’ essay) about lazy “stereotyping” and prejudice in the UK media. 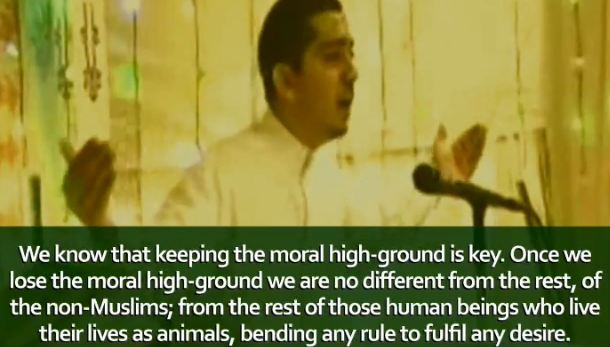 As Harry’s Placed argued, in the context of Hasan’s words, seen in the video above:

“Ask yourself how you would react if a prominent white, non-Muslim journalist gave a talk to a primarily white audience on the need for greater education in which he argued that “we whites should educate ourselves and embrace knowledge, otherwise we will be no better than Muslims” in which he also compared Muslims to “cattle” and “animals”.”

Do we really even have to ask?

Hasan’s essay evokes the risible specter of a Britain infested with anti-Muslim racism and, indeed, he would have us believe that there is nothing short of political witch-hunt against those who practice Islam in UK.

“The mere mention of the words “Islam” or “Muslim” generates astonishing levels of hysteria and hate on the web.”

“From my perspective, the British commentariat can be divided into three groups. The first consists of a handful of journalists who regularly speak out against the rising tide of anti-Muslim bigotry – from the Telegraph’s Peter Oborne to a bevy of Guardian columnists, including…Seumas Milne.”

Of course, it likely didn’t occur to Hasan that he would have a bit more credibility if he didn’t promote the “liberal” virtues of Seumas Milne, the (former?) Stalinst who has defended Mahmoud Ahmadinejad, and characterized Islamist terror groups as representing legitimate, and justified, anti-imperialist “resistance”

“[The] group that concerns me most [are] those commentators who boast otherwise impeccable anti-racist credentials yet tend to be silent on the subject of Islamophobia; journalists who cannot bring themselves to recognise, let alone condemn, the growing prevalence of anti-Muslim feeling across Europe – or acknowledge the simple fact that the targeting of a powerless, brown-skinned minority is indeed a form of racism

Here, Hasan plays to Western guilt, and the media’s racially based hierarchy of victimhood, impeccably.

He conflates European attitudes about Islamism and Islamist terrorism with that of Muslims more broadly, and imputes racism (of “browned skinned” people) to non-Muslims who legitimately fear the former.

Indeed, what many in the UK and elsewhere are fearful of, the rise of radical Islam, is a quite rational response to a very real terrorist threat.  Per the U.S. National Counter Terrorism Center’s (NCTC) website, radical Islamic groups were responsible for approximately 70% of all terrorism related deaths worldwide (9,092 out of 13,186) in 2010, representing an astonishing 98% of all religiously inspired attacks.

Hasan also advances the simply risible claim that Muslims – who represent, for instance, roughly 10% of the total population in France, Austria, Belgium and Sweden – are powerless.  In fact, the Muslim population in Europe in 2010 was 44 million, a number which is predicted to rise by 32% in the year 2030.

Indeed, belying the claim that European Muslims are weak were the results of the French elections, where an extraordinary 1.7 million French Muslims (93% of the total number of Muslim voters) cast their ballot for François Hollande, arguably giving Hollande the election.  And, in the UK, many attributed George Galloway’s victory in the Bradford West by-election to the overwhelming support he received from Muslim voters.

Just compare Muslim political strength in Europe with that of Jews, whose population is 1.4 million, representing 2/10 of 1% of the European population.

“But if those of us who try to participate in public life and contribute to political debate are constantly painted with a broad brush of suspicion and distrust, then what hope is there for the thousands of young British Muslims who feel alienated and marginalised from the political process?”

“I should throw in the towel and go find a less threatening, more civilised line of work. But that’s what the trolls want. To silence Muslims; to deny a voice to a voiceless community.”

The suggestion that Muslims are being “silenced” and “marginalized” represents one of those memes which, though possessing little basis in fact, has come to represent conventional wisdom among the political and cultural elite in the UK.

Hasan himself is a perfect example of a Muslim who is anything but “marginalized”, having been political director at the New Statesman, and routinely being offered a platform at ‘Comment is Free’ (a forum with no shortage of Muslim and Islamist voices) where he is read by millions of UK readers.

More broadly, an internal memo in 2006 provided a glimpse of the prevailing political culture in the UK by revealing that BBC officials deemed it acceptable to show a Bible, but not a Koran, being tossed into the garbage.

BBC also reportedly canceled a film on the 2005 London 7/7 transit bombings because they found the script “Islamophobic” — discounting the opinions of the terrorists’ own parents who backed the show’s portrayal of their children.

During a recent interview in February outgoing BBC director general Mark Thompson admitted that Christianity receives less sensitive treatment because it is “a broad-shouldered religion, compared to religions in the UK which are closely identified with ethnic minorities.”  He added that Islam in Britain is “almost entirely a religion practiced by people who may already feel in other ways isolated, prejudiced against, and where they may well regard an attack on their religion as racism by other means.”

So, if the director of the BBC, a taxpayer financed media empire whose programming is viewed by a staggering 97% of the UK public, acknowledges to privileging Islam over other religions in their decisions regarding programming content, on what basis can Hasan claim that Islam is actually singled out for a disproportionate degree opprobrium?

At the very least, it seems reasonable to conclude that someone who demonizes non-believers in the crudest, most dehumanizing terms, as Hasan has done, will necessarily not take kindly to even the most sober public scrutiny of his faith and the actions of his fellow believers.

So, as long as Hasan and his allies continue to effectively play upon the guilt and moral vanity of the British left, as he’s done again in the Guardian, we will be assured that the BBC, and much of the media, will continue to abide by the unwritten rule of the PC gatekeepers: all faiths are equal but some are more equal than others.