The Guardian’s ‘10 Simple Guidelines‘ for commenting beneath the line include the following:

1. We welcome debate and dissent, but personal attacks (on authors, other users or any individual), persistent trolling and mindless abuse will not be tolerated. The key to maintaining the Guardian website as an inviting space is to focus on intelligent discussion of topics.

8. Keep it relevant. We know that some conversations can be wide-ranging, but if you post something which is unrelated to the original topic (“off-topic”) then it may be removed, in order to keep the thread on track. This also applies to queries or comments about moderation, which should not be posted as comments.

Simple, no? Guardian readers must keep their comments on-topic and free of personal attacks against the author.

However, evidently Guardian moderators can make exceptions depending on the particular Guardian commenter.

The inaugural post at Josh Trevino’s new column on American politics at ‘Comment is Free’ (‘On politics, power and persuasion’, August 20th) was titled ‘Romney-Ryan, counterintuitive champions of Medicare‘ and elicited the following comments from professional Israel hater and friend of antisemites the world-over, Ben White. (Links to comments are here and here.)

White, of course, is referring to the row – which we’ve been covering – over a couple of Tweets by Trevino relating to the terrorist linked Mavi Marmara.

About 20 minutes later, Ali Abunimah, co-founder of the blog which instigated the row and a person whose Tweets have included support for the launching of a violent Third Intifada, endorsement of the Israel-Nazi analogy and, most recently, a bizarre conspiracy theory, commented thus:

So then someone named ‘Adam Levick’ weighed in, asking if moderators would delete White’s comments, which clearly ran afoul of the Guardian’s ‘community standards’. 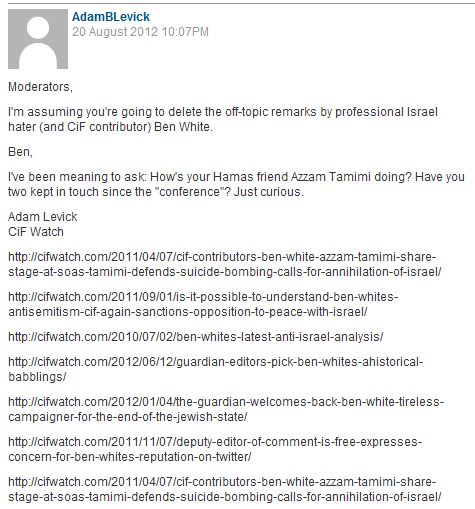 Within about 10 minutes the comment disappeared without a trace.

Subsequent attempts by this commenter to inquire about the comments of Abunimah elicited this message:

That’s right. The user privileges of ‘Adam Levick’ were suspended for what was evidently ‘Comment is Free’ apostasy, while the comments by White and Abunimah cited above have, as of the time of writing, not been deleted.

If you want to complain about the Guardian’s double standards – and failure to abide by their own rules – please consider emailing or Tweeting ‘Comment is Free’ editor Becky Gardiner.