On Sept. 19 the Israeli Air Force targeted two terror operatives affiliated with the “Defenders of al–Aqsa” in southern Gaza.

The IDF Spokesperson Unit even named the terrorists who were targeted (Anis Abu Mahmoud el-Anin and Ashraf Mahmoud Salah) and detailed their terrorist resume:

“One of the operatives, Anis Abu Mahmoud el-Anin, born in 1979 in Rafah, was part of the “Defenders of al-Aqsa,” a terrorist group sponsored by Hamas in the Gaza Strip. Anis was in the final stages of preparing to carry out a terror attack against Israeli civilians. In the past number of years, Anis, as part of the activity of ”Defenders of al-Aqsa” was involved in a number of attempted terror attacks that included smuggling explosive devices into Israel via the Israel-Egypt border, in addition to directing certain terror activity in Judea and Samaria.

In addition, Ashraf Mahmoud Salah, born in 1979 in Rafah, was a member of the Resistance Committees. In the past he had admitted, during an investigation, to transferring two terrorists into Egypt in order to carry out a suicide attack in Israel. Salah was also involved in the buying and selling of weapons.”

The Guardian’s Sept. 20 edition of ‘Picture Desk Live’ included a photo and caption depicting the aftermath of the incident (Palestinian seen, once again, “inspecting” wreckage), taken by EPA’s Gaza based photojournalist Ali Ali: 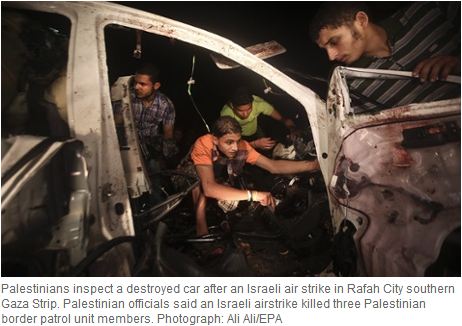 Note that readers are only given information provided by Hamas officials which claims the the two dead Palestinians were “border patrol unit members”.

The IDF’s version of the event is completely ignored.

Later in the day, the Guardian posted a Reuters video of the ‘aftermath’ of the attack (which, again, included not much more than Gazans “inspecting” wreckage from the terrorists’ vehicles). You can see the video, here. 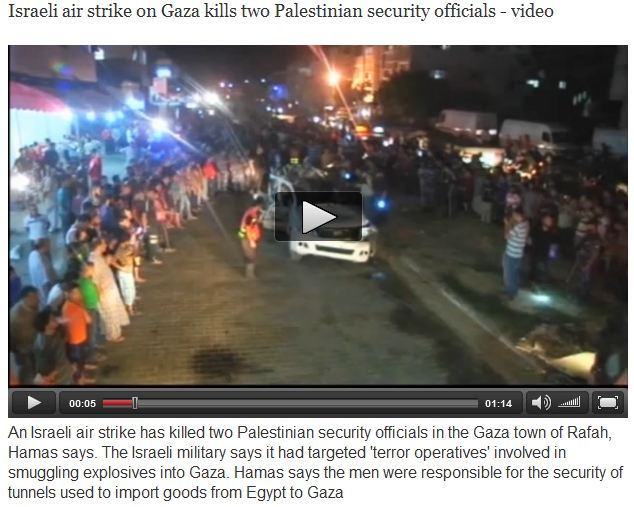 While the caption beneath the video finally cites Israeli information regarding the terror affiliations of the Palestinians killed in the attack, note that in both the photo and the video headline, Hamas’ version (that the two were “security officials”) is given much more credibility.

The headline in the video doesn’t even wrap quotes around the words ‘security officials’, nor does it qualify the text with a phrase such as “according to Hamas.”

Do I even have to ask if the Guardian would ever take IDF claims regarding military acts at face value?