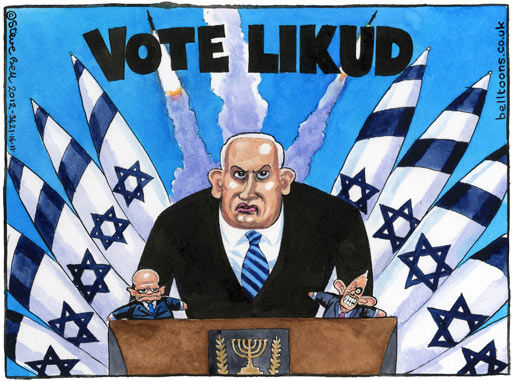 The Saudi paper Al-Watan, on October 11, 2008, published this, depicting Jews were puppet masters, controlling both McCain and Obama.

The message the Guardian cartoon is trying to convey – similar to the Arab cartoons posted above – is unambiguous.

Bell is complaining that recent expressions of support for Israel’s operation in Gaza by UK foreign secretary William Hague (and Tony Blair) suggest they are being controlled by the Prime Minister of the Jewish state.

Walter Russel Mead summed it up best in response to a BBC journalist who stated recently that “The American Jews influence US foreign policy and that explains Washington’s unwavering support for Israel.”

“…weak minds…are easily seduced by attractive but empty generalizations. The comment attributed to August Bebel that anti-Semitism is the socialism of fools can be extended to many other kinds of cheap and superficial errors that people make. The baffled, frustrated and the bewildered seek a grand, simplifying hypothesis that can bring some kind of ordered explanation to a confusing world; anti-Semitism is one of the glittering frauds that attract the overwhelmed and the uncomprehending.”

Steve Bell simply couldn’t accept that British expression of support for Israel’s action in Gaza is based on their understanding of the threat posed by Hamas and other terrorists movements, or other strategic considerations.

He needed an easy explanation as to why his nation’s leaders don’t share his hostility towards Israel, and the temptation to attribute such a vexing dynamic to sinister Israeli control was too great for him to resist.

The Guardian cartoonist has succumb to historically antisemitic (and necessarily reactionary) narrative which imputes Jewish power and Jewish control to the decisions of non-Jewish world leaders.

(Bell, and the Guardian, needs to be held account, so please consider emailing the Guardian’s readers editor, Chris Elliott, reader@guardian.co.uk, to respectfully voice your complaint.)

UPDATE: Per The JC, Steve Bell responded to criticism that his cartoon is antisemitic, thus:

“I can’t be held responsible for whatever cultural precepts and misapprehensions people choose to bring to my cartoon. My intention, I think, is fairly clear.”