In a BBC Watch post which went viral  – the effects of which are still reverberating today – Hadar Sela reported on a Tweet by BBC Gaza correspondent Jon Donnison with a photo he erroneously claimed was that of a dead child in Gaza.

The incorrect information sent to 7,971 of Donnison’s followers was originally Tweeted  by Hazem Balousha – a Palestinian ‘journalist and social activist’ – and included the photo with the words “Pain in Gaza”, to which Donnison added his own commentary – “Heartbreaking”. 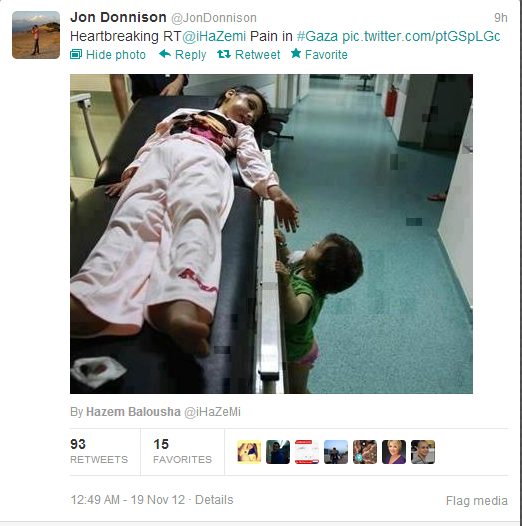 However, blogger Adam Holland replied to Donnison, informing the BBC journalist that the photo was not from Gaza – but, rather, from Syria.

Donnison later acknowledged his mistake and deleted the Tweet.

However, in addition to the sloppy journalism by Donnison, the man who originally Tweeted the photo of the child, whose judgment Donnison trusted, has an interesting background himself.

Hazem Balousha is a Palestinian Journalist & social activist based in Gaza, and founder of Palestinian Institute for Communication & Development Palestine/Germany ‘ – an organization based in the Rimal District in Gaza

Quite interestingly, Balousha is also a Guardian journalist who has co-written pieces with Harriet Sherwood, Peter Beaumont and Chris McGreal – and was described as a “colleague” by the Guardian’s Richard Adams in a live blog on the Palestine Papers in 2011.

McGreal’s Jan 7, 2009 report written with Balousha – which McGreal cited in a recent report, on Nov. 23, 2012 – suggested, without any proof, that Israeli soldiers beat Palestinians in front of the their children to humiliate them, and even resurrected the Al-Durra libel in service of a broader narrative suggesting that IDF cruelty towards Palestinians “draws many into the cult of [suicide bombing] the ‘martyr'”.

The overwhelming majority of Balousha’s pieces at the Guardian were published between Dec. 28 2008 and Jan. 19, 2010, focusing on the suffering (most by children) during Cast Lead.  However, he also contributed prior to the war and, in an article he wrote in 2007, for instance, he admitted to having an eldest brother close to Hamas.

Much of his Guardian work explores the theme of dead children, and children otherwise victimized by the Israeli military, and many of Balousha’s tweets include pictures of dead or injured Palestinian kids. (Many of these pictures are from a photographer named Ashraf Amra, an activist who has a history of using children to engage in photographic propaganda.)

Here’s a passage from his report:

“False information about the current war is also being spread via Twitter and Facebook – pictures of dead children, for example, that are actually from Syria. That angers [Gaza activist] Ebaa Rezeq. “We have to stick to the truth, or no one is going to believe us any more.” Ulla Papajak also believes that pictures and information need to be verified for accuracy – even if he also understands that there is no time to do so.”

It would be interesting to know if he and Donnison were similarly angry at themselves for casually propagating patently false information (to nearly 8,000 followers) about the horrific death of a child.

“The reliance of Western media outlets upon local staff for information, translation and introductions is not a new phenomenon. Neither is the fact that some of those local journalists may have additional connections to regional actors, as was apparent a decade ago during the second Intifada. But as technology advances and social media increasingly cuts out the ‘middle man’ between the journalist and the audience, it is obvious that editors and journalists shoulder a greater responsibility for checking the reliability – and motives – of their local staff and sources.”

Such journalist activists – whether they’re at the Guardian or the BBC – are risking more than their own reputations.  If Guardian and BBC editors continually allow their journalists to make such egregious errors with impunity, and report the news in a manner resembling political advocacy rather than professional journalism, whatever remaining credibility they may have will continue to erode.

Increasingly, as Gaza activist Ebaa Rezeq noted, “no one is going to believe [them]”.