The Guardian gets it wrong: Exit polls indicate no rightward political shift in Israel

If exit polls (as reported by Times of Israel and other media outlets) turn out to be accurate, the Guardian mantra – parroted by nearly every commentator and reporter who’s been providing ‘analysis’ on the Israeli elections – warning of a hard and dangerous shift to the right will prove to have been entirely inaccurate.

In the final days before the vote, the Guardian’s Jerusalem correspondent Harriet Sherwood seemed certain that the elections would bring “a more hawkish and pro-settler government“, and Guardian Middle East Editor Ian Black warned that “Netanyahu [was] poised to…head a more right-wing and uncompromising government than Israel has ever seen before“.

Rachel Shabi predicted that Israel would elect “the most right-wing government in its history“, while Jonathan Freedland expressed gloom that diaspora Jews would have to watch “the centre of gravity…shift so far rightward [in Israel] that Netanyahu and even Lieberman will look moderate by comparison.”

However, based on preliminary reports, not only does it appear that there has been absolutely no rightward shift, but the makeup of the next Knesset may be slightly more left than the current one.

While in 2009 the right-wing bloc bested the center-left bloc by 65-55, the tallies released tonight after polls closed in Israel at 10 PM showed that the new Knesset will have a narrower (61-59) right-bloc advantage. 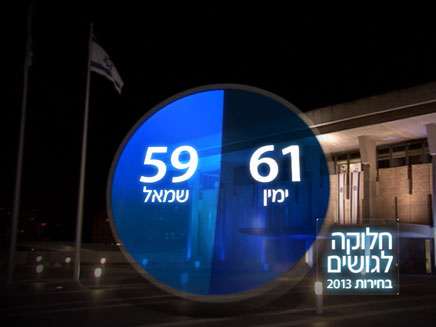 According various exit polls, the top three parties will be Likud-Yisrael Beiteinu with 31 Knesset seats, the centrist Yesh Atid with 19, and the leftist Labor Party with between 16-18. The rightist party, Jewish Home, headed by Naftali Bennett, came in fourth and will have 13 or 14, while Shas, the ultra-orthodox party, came in fifth with 12.

Some Israeli commentators are already predicting that Binyamin Netanyahu will attempt to form a centrist or even a right-center-left coalition.

Though the final results aren’t expected to be announced until the early hours of Wednesday, a few things are certain:

The Guardian invested heavily in promoting their desired political narrative of a Jewish state lurching dangerously towards the right.

They got it completely wrong.

They will learn absolutely nothing from their egregious miscalculation.