We recently noted that the Guardian was one the “news sites” which jumped on the media bandwagon and accused Israel of firing a missile on Nov. 14, during the Gaza war, at a house near Gaza City which killed the 11-month old son of BBC Arabic journalist Jihad Misharawi and his sister-in-law. (Misharawi’s brother also later died of wounds suffered in the blast.)

As Hadar Sela of BBC Watch noted recently, the story was first reported by BBC Arabic, and disseminated throughout the media (along with the heart-breaking photo of Jihad Misharawi and his dead child) by the head of the BBC Jerusalem Bureau, Paul Danahar – and by other BCC employees.

Whilst the Guardian’s coverage of the tragic death of Omar Misharawi was relatively restrained – at least in comparison to other news outlets, and relative to their usual rush to judgement involving Israel – the paper’s media blogger Roy Greenslade published the following: 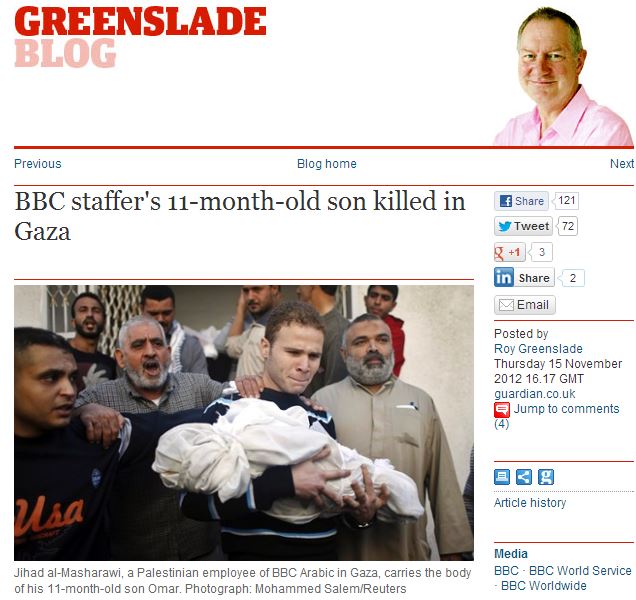 Greenslade, citing the BBC as his source, opened with the following, unequivocally assigning blame to Israel:

However, Elder of Ziyon, BBC Watch, and Harry’s Place were among those who examined the evidence and suggested the possibility that Omar Misharawi was killed by an errant Palestinian rocket – skepticism which was confirmed when the UNHRC issued an advance version of its report on the war which included the following:

“On 14 November, a woman, her 11-month-old infant, and an 18-year-old adult in Al-Zaitoun were killed by what appeared to be a Palestinian rocket that fell short of Israel.” [emphasis added]

A U.N. official confirmed to the Free Beacon that this passage in the report was indeed referring to Misharawi.

This information was first uncovered by Elder of Ziyon and has subsequently been reported by, among others, the New York Times, the Washington Post, AP, Huffington Post, and even by the BBC’s Jon Donnison.

On March 8, we posted on Greenslade’s error and, further, in an attempt to get his direct attention – and to circumvent the slow response time of Guardian editors who often only begrudgingly make corrections – we Tweeted him the following on March 11:

In November last year I carried a report that the 11-month-old son of a BBC staffer was killed during an air strike by the Israeli army on the Gaza strip. Omar Misharawi, son of the BBC Arabic service’s picture editor, Jihad, died from shrapnel wounds.

But, according to an inquiry into the conflict in Gaza by the Office of the High Commissioner for Human Rights (OHCHR), the Israeli defence forces were not responsible for the death.

A detailed report on several fatal incidents, issued on 6 March, states that the death of Omar and his aunt was more likely to have been the result of a rocket attack by Hamas.

Though we’ll never know with 100% certainty if our post and/or Tweet prompted his correction, Greenslade nevertheless deserves credit for revisiting a story he originally got wrong, and setting the record straight.

Update 2: The Guardian Readers’ Editor, Chris Elliott, contacted us to explain that Greenslade did not write his new story about the death of Omar Misharawi because of our post or Tweet.