Is the Guardian unmoved by the recent terror attack on a 9-year-old Israeli girl?

As most mainstream media news sites and wire services have reported, a 9-year-old girl named Noam Glick was shot Saturday night in Psagot – an Israeli town located north of Jerusalem, adjacent to Ramallah, al-Bireh, and Kokhav Ya’akov – in a likely Palestinian terror attack.

Noam had stumbled upon a man, believed to be a Palestinian terrorist, as he was about to break into her home. He shot her from a very close distance and then fled the scene. The girl was apparently saved because the bullet that hit her in the neck didn’t move two centimeters to the left or the right, her father, Yisrael Glick, told reporters.

Around 9:20 p.m. on Saturday night Noam returned home from a Bnei Akiva event. She walked by her front yard, which was littered with bicycles and a tricycle. As she started to descend the outside back stairwell, she saw a figure on the bottom landing with a masked face and eyes that peered out into the darkness, her father said.

“At first it went through her head that maybe this was a guest, but then she understood that it was not,” Glick said.

Based on his daughter’s description, Glick said, the man saw Noam, stood a meter away, aimed his gun and fired three shots.

Noam later told her father, “Abba [father] he aimed a gun at me and then there were three [explosions], bomb, bomb, bomb.”

Then she yelled, “‘Save me!’ as loud as she could,” Glick said. He added that he believes her scream scared the man and caused him to flee.

IDF soldiers are still searching for the terrorist who they believe fled to the nearby Palestinian town of El Bireh.

Thus far, the Guardian has not devoted any coverage to the attack on Noam.

Their dearth of coverage regarding the attempted murder of a little Israeli girl stands in contrast to their coverage, in July, of a 5-year-old Palestinian boy who was briefly detained by Israeli troops after throwing rocks at cars near Hebron. Here’s a snapshot of the Guardian video report on the incident: 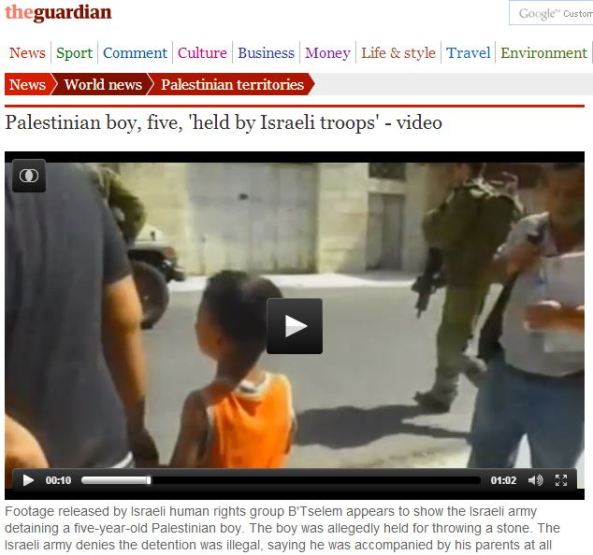 The father of the Palestinian boy was briefly questioned and then the two were both released.

Noam Glick enters a Jerusalem hospital after being shot by a terrorist on Saturday night.