Nicolas Anelka and Dieudonne: the quenelle is an antisemitic salute

Cross posted by Dave Rich from the blog of The CST

The quenelle salute given by West Brom striker Nicolas Anelka when he scored in their Premier League match on Saturday is an antisemitic gesture, and he should be punished accordingly by the FA.

In the Luis Suarez and John Terry cases the FA established the ‘zero tolerance’ principle, that a player’s intention does not excuse the use of racist language. The same principle must be applied in this case. Anelka says that he is not racist or antisemitic and that he did not intend his quenelle to have an antisemitic meaning, but this is beside the point:  just as the FA accepted that Luis Suarez is not a racist person while banning him for eight matches after he used racially abusive language towards Patrice Evra.

That the quenelle is antisemitic is beyond dispute. In France it has become part of a social media craze in which people find ever-more offensive places to insult Jews by doing a quenelle: this blogpost shows photographs of people performing quenelles at Auschwitz, at the Western Wall in Jerusalem, at the Holocaust memorial in Berlin, outside synagogues and Jewish shops and at dozens of other Jewish sites. There is even a photograph of someone doing a quenelle outside the Ozar Hatorah Jewish school in Toulouse, where Mohammed Merah murdered three children and a teacher in March 2012:

If the people in these photographs did a Nazi salute at any of these sites they would risk instant arrest and prosecution. The quenelle is a way of getting around the law, while still getting the same thrill of breaking the taboo against antisemitism.

The quenelle was invented by French comic Dieudonné Mbala Mbala. Anelka has excused his quenelle by saying that it was “just a special dedication to my comedian friend Dieudonné”; but this is no excuse, it just confirms the offence. Dieudonné has numerous convictions for antisemitism in France. One of these was for a sketch in which he gave a heroism award to French Holocaust denier Robert Faurisson. The ‘comedy’ was that the award was presented by a man in a concentration camp uniform, complete with a yellow star.

Dieudonné claims that the quenelle is anti-establishment and anti-Zionist, not antisemitic. This is true, but also misleading – because Dieudonné believes that the establishment is run by “Zionists”. He told Iran’s Press TV:

The Zionist lobby … have taken France as hostage and we are in the hands of ignorant people, who know how to structure themselves into a mafia-like organisation and… have now taken over a country.

This is not the anti-Zionism of people who think that the Palestinians get a raw deal from Israel: it is the anti-Zionism of the Protocols of the Elders of Zion, of a conspiracy theory that believes “the Jews pull all the strings”, as French extremism expert Jean-Yves Camus put it. (There is more background about Dieudonné’s political journey here).

It is also a political worldview that has led Dieudonné into a friendship with leaders of the far right Front National (FN). In 2006, Dieudonné attended the FN’s annual festival, and in 2008 veteran FN leader Jean Marie Le Pen became godfather to one of Dieudonné’s children.

Here is Le Pen (centre) with the FN’s Bruno Gollnisch (left) and friends, doing a quenelle: 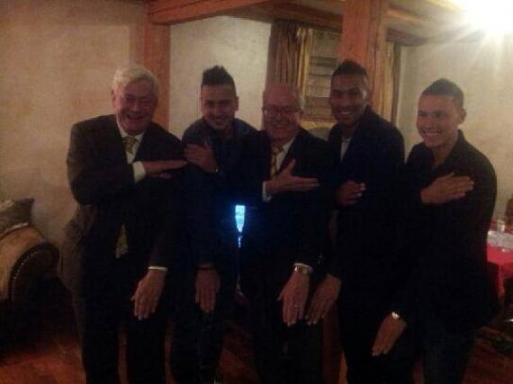 The quenelle was unknown in Britain before this weekend, but it has been at the centre of a public storm in France due to the viral spread of people doing it at Jewish sites and posting the photos on social media. Government ministers are talking of banning Dieudonné’s public appearances because they believe that he incites hatred of Jews and poses a threat to public order. Dieudonné denies this, but when Nicolas Anelka did his quenelle during a match that was broadcast live on French TV, he inserted himself into a race row in his home country – on the side of the alleged racist.

This does not mean that Anelka intended to make an antisemitic statement, or even that he understood the meaning of what he did: but now that the quenelle has entered British football, the FA need to set a clear precedent by acting swiftly and unequivocally to punish those who do it.