Why did the Guardian publish, then remove, article on anti-Zionist ‘activist’ Stuart Rees?

Recently, our Google Alert for Israel-related content published at the Guardian and ‘Comment is Free’ included this:

However, upon opening the link, we saw the following: 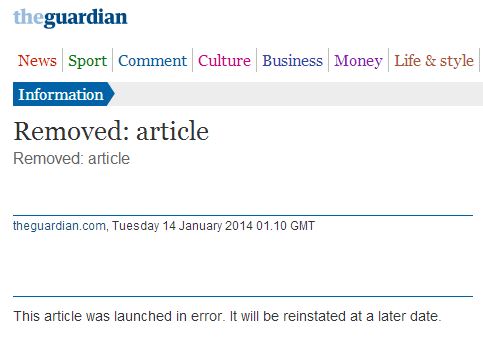 The text and photo in the Google Alert was sufficient to identify the protagonist in their deleted story as anti-Israel campaigner Stuart Rees, the Director of the Sydney Peace Foundation.

You may recall that in 2003 Rees’s group awarded their annual ‘Peace Prize’ to that prolific “liberal” Palestinian activist, Hanan Ashrawi.  Further, after pro-Israel groups criticized the award, Rees charged that Jewish groups who complained were challenging “the health of Australian democracy” by using their “formidable financial power” to engage in a campaign of “deceit, bullying and intimidation.”

Fortunately, we were also able to locate a cached page of the deleted Guardian article, written by Nikki Barrowclough.

Though we don’t know for sure why the Guardian removed the article, upon reading the content (on the cached page) it appears that their decision may have had something to do with the timing of the article’s publication vis-a-vis the death of Ariel Sharon – particularly, a bizarre comment by Rees (in bold) in the last passage of this excerpt:

One evening in Doha, in December: Sydney University’s Professor Stuart Rees is standing in the middle of a packed room, deep in conversation with the veteran Palestinian negotiator, Dr Saeb Erekat.

Famous figures in the Palestinian political landscape mill around them. Hamas chief Khalid Mish’al is there, along with Hamas’s head of international relations, Osama Hamdan. Rees is completely engrossed in his discussion with Erekat, a key figure in the latest round of peace talks brokered by the US secretary of state, John Kerry. But later on he’ll meet Mish’al, and will become part of a conversation between the Hamas chief and the UN’s special rapporteur on Palestinian human rights, Richard Falk. “He insists that the soft power of international public opinion is strategically far superior to any further use of violence,” says Rees of Falk. Meanwhile, Mish’al tells the two men that establishing common ground with Palestinians in the West Bank and in the diaspora is one of his key goals.

It was an extraordinary gathering in the Qatari capital, which went largely unreported in the western media. The Qatar-based Arab Centre for Research and Policy Studies had organised a three-day conference titled “the Palestinian cause and the future of the Palestinian national movement”.

Little did anyone there know that just over a month later, on 11 January 2014, the world would learn that the former Israeli general and prime minister Ariel Sharon was dead. The man known as “the sleeping giant”, who had been in a coma for eight years after suffering a stroke, was 85 when he died: still hated by most Palestinians.

Rees, the founder of Sydney University’s Centre for Peace and Conflict Studies, and chairman of the Sydney Peace Foundation – he set up the annual Sydney peace prize, Australia’s only international peace award – and who was one of the speakers at the Doha conference, says the former Israeli PM should be regarded as “a military thug”.

“The fact that he died eight years ago but has officially only just died, indicates to me that his image as a military warrior was synonymous with the identity of Israel, and that they couldn’t afford to let him appear to die. It’s almost Kafkaesque that this should now be headline news with the mainstream media paying their respects to him,” he adds.

Later in the article, there’s the following risible – some may say Kafkaesque – characterization of the Hamas-friendly “peace warrior”:

You can read the rest of the Guardian’s puff piece on Rees, and his friendly encounters with Hamas ‘peaceniks’, HERE.