When anti-Semites at the Guardian fall out

One of the more ignorant claims advanced by the anti-Israeli crowd commenting at the Guardian, both above and below the line, is that the smaller number of Israeli casualties compared to Palestinian casualties represents Israeli belief that Palestinian lives are worth less – much less – than Arab lives.

The specious argument is used to complain that there is a lack of morality on the Israeli side, rather than admitting that Israel takes enormous care to protect its citizens of all religions and groups from terrorist and other armed attacks.

It is usually accompanied by two additional themes. One is the complaint that  “no-one ever mentions Palestinian casualties” when in fact there is no other group whose casualties are so carefully documented and republished over and over in media and by NGOs. The other is the accusation that despite the enormous increase in the Arab population since 1967, the lower number of Israeli casualties represents a policy of genocide directed at the Arabs on the West Bank and in Gaza.

To put it in a different context, would anyone argue that the lower losses of British lives in WW II compared to German lives (leaving aside the horrendous losses suffered by the Russians and the massacres of others across Europe and North Africa inflicted by the Germans) represented a loss of moral stature by the British? Should more British soldiers and civilians have died to even the balance and allowed us to feel that indeed the British respected human life as much as the Nazis?

We were treated to another of Steve Bell’s anti-Semitic cartoons this week, intended to illustrate this theme. The three murdered Israeli boys are shown, in the eyes of – well, who? The world? – to outweigh uncountable Palestinians killed in the conflict: 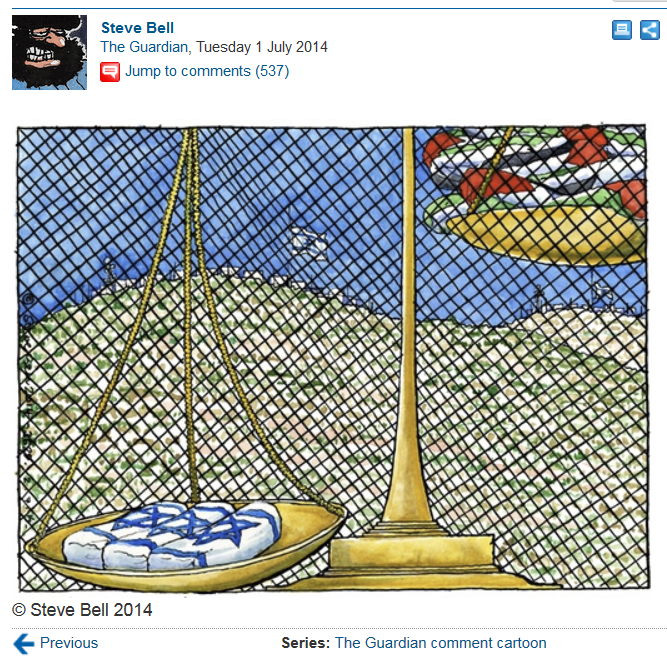 As bad as this cartoon is, for all the reasons above, especially appearing in the Guardian which makes it its mission to emphasize every Palestinian death, it led to a complaint by Martin Rowson.  Rowson suggested that Bell had, in effect, plagiarized his “trope” from this even worse cartoon:

As appalling as both cartoons are, there is a certain enjoyment to be had from seeing this falling out among two leading purveyors of antisemitic tropes.

What is horrifying, of course, is the support these two vicious characters get from their dedicated followers. This includes  the Guardian editorial staff, who allows them to post such agitprop, and their followers below the line – for example, here’s a comment below Steve Bell’s latest:

And there we have it – the imbalance between Israeli deaths and Palestinian deaths is due to Israel’s presumably genocidal policies which are gradually wiping out the occupants of Gaza and the West Bank – even though their numbers, mysteriously, continue to grow at one of the highest rates in the world.

Or even the slightly more “sophisticated” argument that this represents a way for Israel to prevent reaching a peace agreement:

By continuing to publish these kinds of cartoons, and permitting these kinds of comment to stand, it is, in fact, the Guardian that does a monumental disservice to any idea of reaching a peace agreement, or, if they really want to, helping the Palestinians achieve their statehood.

But in the meantime, if nothing else, let’s hope the anti-Semites at the Guardian will continue to complain about each other.