Does the Independent think Israel’s response to Hamas is ‘un-Jewish’?

What would be the appropriate UK response to thousands of rockets raining down on London, fired by an extremist movement dedicated to the country’s destruction, and one which forced thousands of Brits to take cover in bomb shelters?

Do you think it’s safe to say that the British government would give its military leaders explicit orders to stop the rocket fire? Further, considering such a hypothetical scenario, is there any question that ‘enlightened’ voices in the media would support the government while it engaged in such a basic act of self-defense?

Of course, over the past couple of days, the nation responding to such a real threat hasn’t been the UK, but Israel.

So, naturally, after two days of anti-terror operations against Hamas to stop the rocket fire terrorizing its citizens, the Independent published a cartoon not only suggesting that Israel’s response has been ‘disproportionate’, but also seeming to imply that the response is un-Jewish.

Here’s the cartoon published yesterday in the Indy by Dave Brown, a cartoonist who (as Eylon Aslan-Levy writing at Tablet on the cartoon reminded us) drew the infamous cartoon during the 2nd Intifada of Ariel Sharon devouring Palestinian babies. 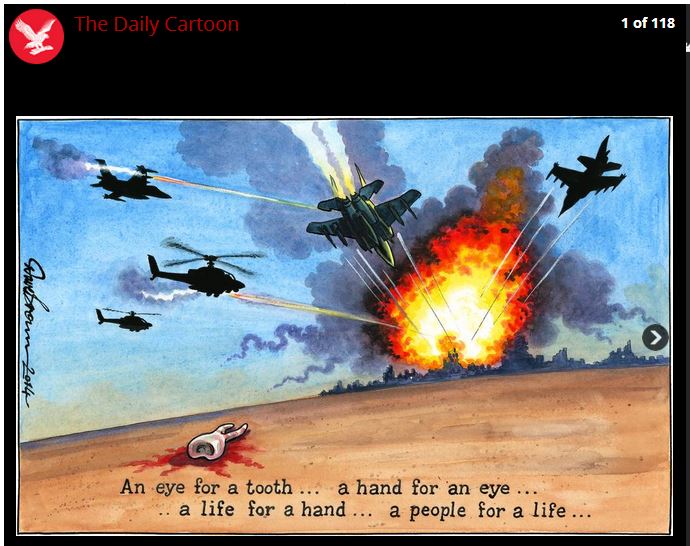 Pay close attention to the text at the bottom of the graphic, which evokes the following Hebrew Bible verse (from Leviticus):

fracture for fracture, eye for eye, tooth for tooth. Just as he inflicted an injury upon a person, so shall it be inflicted upon him.

The Indy cartoon’s revision of these words to “an eye for a tooth…a hand for an eye…a life for a hand…a people for a life” not only accuses Israel of responding disproportionately, and arguably (with the words ‘a life for a people’) engaging in something akin to ethnic cleansing, but that Israel has forgotten its own Jewish ethical tradition.

First, regarding Brown’s use of the Bible verse:

It should be noted that the Jewish oral tradition (as codified in the Talmud) is explicit that this verse ‘an eye for an eye’ has a far more narrow meaning than most suppose. It doesn’t literally mean that if someone pokes out another’s eye, the punishment meted out should similarly consist of poking out the attacker’s eye. It is understood as a commandment simply that justice must be proportional.

So, has the IDF military response – a campaign initiated only as a last resort after cease-fire talks failed to stop the rockets – been proportional?

Well, first we must remember that army has been narrowly targeting the instruments of Hamas terror – bombing concealed rocket launchers, launching infrastructures, training bases, terror tunnels and other military targets.

Further, any serious observer of the conflict would have acknowledge Israel’s strenuous efforts to avoid harming Palestinian civilians – despite the complication caused by Hamas purposely placing their instruments of war in civilian areas.

The IDF has routinely been warning Gaza civilians of intending attacks in order to limit casualties. This includes dropping leaflets and sending text messages to Palestinians who may be in harm’s way, phone calls to homes (used as hubs for terror activities) that are about to be bombed, and the ‘knock on the roof’ tactic where Israel deploys a ‘scare’ bomb which uses a loud noise to influence civilians to leave the targeted area.

Again, ask yourself, would the UK go to such measures to warn their enemies of impending attacks if they were facing a similar threat?

Moreover, it’s remarkable that such political cartoonists have once again failed to focus their righteous outrage and creative energies towards the Islamist extremist group in Gaza.  There are of course no cartoons taking aim at Hamas’s racist ideology, or their callous disregard for human life – not just Jewish life but Palestinian life as well. Hamas after all is an Islamic movement which regards the Hebrew Bible as a sacred text, and so would similarly seem bound by its ethical commandment to engage in proportionate justice, and, most importantly, to value life, first and foremost.

Given Hamas’s religious tradition, how then are we to explain their recent acknowledgement that they’re targeting all Israelis civilians, their new warnings that they’ll once again begin launching waves of suicide bombings “on every bus, café and street”, and their leaders’ explicit support for the use of Palestinian human shields.

Would Indy editors ever sanction an op-ed or cartoon vilifying such blatant Palestinian disregard for the sanctity of human life as ‘un-Islamic’?

No, of course they wouldn’t – any more than they would castigate US and British leaders for behaving in an ‘un-Christian’ manner for the huge civilian toll over the years of targeting Islamist fighters in Iraq, Afghanistan or Pakistan.

Well, at least if fairness and moral consistency represent professional values Indy editors aspire to, then perhaps they should consider avoiding such imperious, sanctimonious and hypocritical sermons to Jews as well.