As we noted in a post earlier today, Times of London editors chose a headline for an article by Gregg Carlstrom today which leveled a charge not supported by the text, and which mischaracterizes a proposed bill designed to enshrine Israel as “the nation-state of the Jewish people”.

We noted that under two versions of a bill Netanyahu’s cabinet voted to approve on Sunday, the law – which would need to be approved by the full Knesset – would establish “national rights” for the Jewish people (such as the right of Jews to immigrate to Israel), while “equal individual rights for all citizens” would be protected.

Though the headline was possibly inspired by a stray comment by Yair Lapid, Netanyahu’s minister of finance, who used language echoing the “second class citizen” charge, an accurate headline can not pass off as fact an accusation which is only claimed by some – at least without quotes or some other qualifier.

Recently, we checked the Times of London again, to see if – after our complaint to the paper – they modified the misleading headline.

However, upon glancing at the the home page we noticed that the story is actually now featured on the home page. 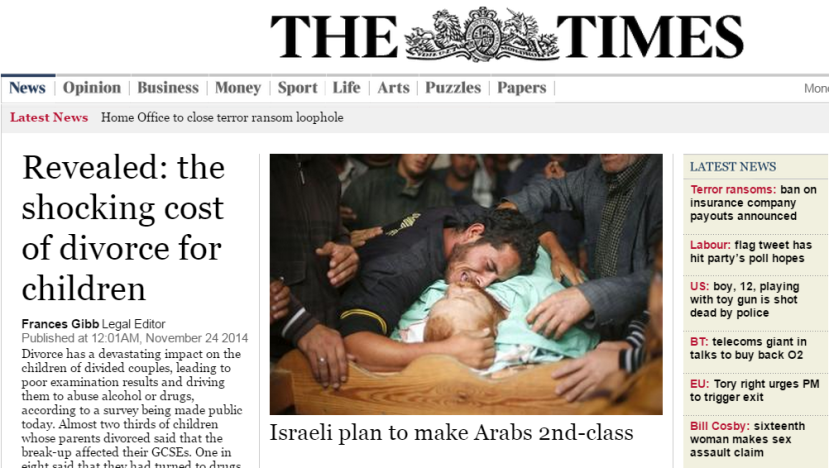 In addition to the extremely misleading headline, note that the story is even more muddled by the photo choice. The Reuters image illustrates a lone (context-free) transitional passage, about half way through the article, about a Palestinian killed by Israeli forces after ignoring multiple warnings while approaching the Gaza border.

Times of London readers who go to the home page of their site are now treated to two of the top memes about the region within the UK media: Israeli racism and Palestinians killed by Israelis – and, due to poor editorial decisions, are now likely to be under the erroneous impression that there’s a “plan” to make Arabs second class citizens.