A Nov. 5 article in the Daily Mirror on terrorism-related travel warnings issued by the foreign office to British tourists planning trips to Mediterranean countries includes a section on risks associated with Israel.

The Mirror copy and pasted information from the foreign office report (some of which is clearly outdated), and curiously omitted the passages relating to the most recent wave of Palestinian terror.

Here’s the entire section on Israel in the Mirror article.

There are heightened tensions in Israel, brought about by rocket attacks from Gaza into Israel and Israeli air-strikes on Gaza, increase the risk of retaliatory terrorist attacks in Israel.

As a result, the FCO advise against all travel to Gaza, the Sheba’a Farms and Ghajjar along the border with Lebanon (the ‘Blue Line’) and east of Route 98 along the Syrian border.

However, even more misleading than the text is the image editors chose to illustrate “increased tensions” in the region: 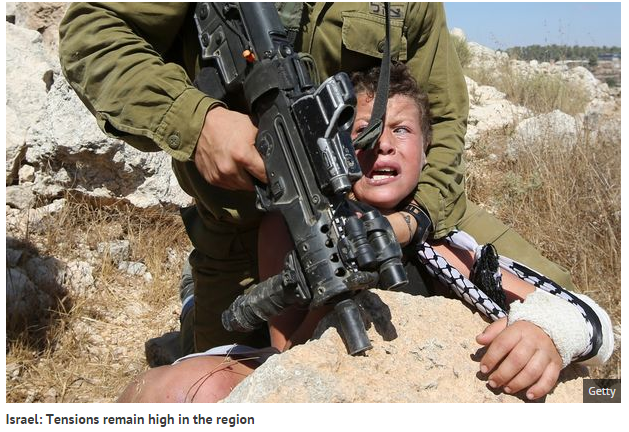 The photo is of course from an incident in late August, when the Tamimi family in the Palestinian town of Nabi Saleh staged their latest Pallywood production, placing their 12 year-old son, Muhammad, in danger by encouraging him to attack soldiers with rocks to score propaganda points when the soldier responded.

However, as we noted, not only was the brief detention of Muhammad called off by the IDF after his family and friends began attacking the soldier, but two British publications revised or removed stories about the incident after being reminded that it was not news, but a cynical attempt to exploit children to harm Israel’s image.

The fact that this British tabloid chose that particular image to illustrate the putative threats faced by British tourists visiting Israel once again demonstrates the willingness of editors to seize upon and exploit even the flimsiest evidence of alleged Israeli villainy.