Earlier today, we posted about a wildly inappropriate photo chosen by Guardian editors to illustrate a story about an airstrike which killed Samir Kuntar, the Lebanese-Druze terrorist who brutally murdered several Israelis, including a 4-year-old girl, in Nahariya in 1979.

We sent the following tweet to the Guardian’s picture editor: 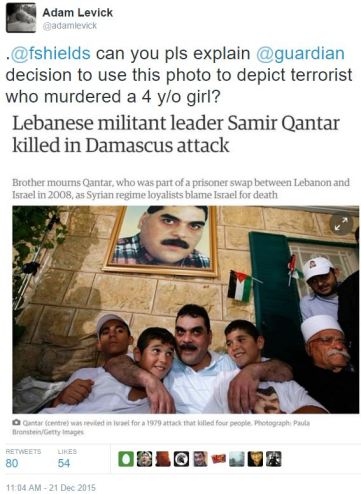 After a couple of hours, and more than 50 retweets, the editor, Fiona Shields, tweeted back the following:

@adamlevick Thank you for pointing out the inappropriate use of this picture. We have changed the illustration with this article now.

They also added the following addendum at the bottom of the article:

Many thanks to those of you who retweeted our concerns.