The magazine Private Eye noted the “oddly partisan” nature of a Guardian article (Corbyn joins seatless commuters on floor for three-hour train journey, Aug. 16th) which characterized the Labour leader as a man of principle for joining 20 seatless commuters on the floor of a “packed” train from London to Newcastle.

Of course, this was published a week before CCTV footage emerged contradicting claims that he was forced to sit on the floor, but that isn’t the point of the Private Eye article, which revealed that the co-author of the Guardian piece, film maker “Charles Anthony”, is a passionate Corbyn supporter who used to be a member of Socialist Workers Party (SWP).  SWP is a extreme-left group criticized for (among other things) its “involvement in the bannings of Jewish Societies at university campuses and its repeated hosting of Gilad Atzmon“. 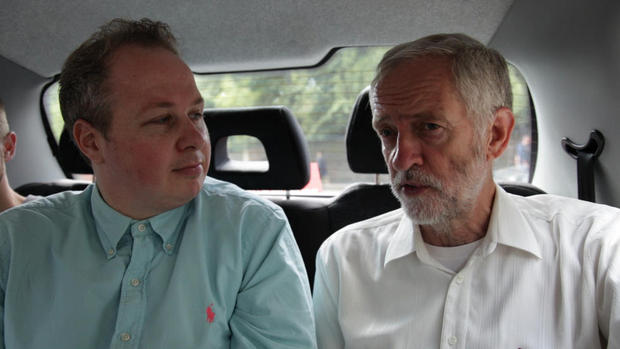 Anthony, during an interview with Jeremy Corbyn

Anthony, during an interview with Max Blumenthal

Well, it turns out that there’s more about Anthony than what the Private Eye revealed, facts especially relevant in light of the antisemitism scandal plaguing Labour.

In April, Anthony defended NUS President Malia Bouattia from charges of antisemitism after it was revealed that she condemned “Zionist-led media outlets” for “oppressing the global south”.

Anthony also published an article at Middle East Eye (where he’s employed) titled “Corbyn doesn’t have an anti-Semitism problem. His accusers do”, which argued that “accusations that Labour is soft on anti-Semitism are completely false, inaccurate, opportunistic and political motivated”.  His op-ed included the following passages where he attempts to refute those who “conflate” Zionism with Judaism and suggests that the former is a form of “racial supremacy”.

Conflation is the axis where anti-Semites and Zionists meet. Both believe Israel to be a direct synonym for Judaism. It is not. Zionism is a political ideology based upon an ethnocentric form of nationalism, more neo-conservative outpost than religious utopia. It shares more in common with past European hangovers: colonialism and racial supremacy.

Further in the article he defended Ken Livingstone’s claim that “Hitler was a Zionist”.

Enter Ken Livingstone to save the day, gulp. His words certainly added fuel to the fire. Ken is guilty of liking a drink, rambling and not articulating said point well. But what he said, no matter how cack-handily, was actually, believe it or not, based in truth.

John Mann suggested Ken read Mein Kempf, as if Livingstone was totally unaware of who Hitler was and what he did. Maybe Mann should do a bit of reading himself. He could start by reading an article published by the World Holocaust Remembrance Centre regarding a 1933 collaboration between the Nazis and Zionists centred on the relocation of German Jews to Palestine.

The link he provides details the widely known Ha’avara agreement in which “German Jews emigrating to Palestine” could “retain some of the value of their property in Germany by purchasing German goods for the Yishuv”.  However, this certainly does not demonstrate that there was “collaboration” between the Nazis and Zionists, yet alone back up Livingstone’s false allegation that Hitler was a Zionist.  As Yehuda Bauer, one of the foremost Holocaust scholars, explained: “The Ha’avara agreement was motivated, certainly as far as Hitler himself was concerned, by the overwhelming desire to get rid of the Jews of Germany by emigration”.

But, it gets worse.

In 2014, he wrote an op-ed which included the claim that “calls for genocide [against the Palestinians], or the defence of it, have become all too common in modern Israeli discourse”, that Israelis don’t view Gaza children killed by the IDF as human and that “the supremacy of the master race and dehumanisation of the other is” in fact “not new” in Israel”.

The op-ed also evokes the antisemitic blood libel in the following paragraph:

You can dress genocide up in the cloth of democracy and freedom; many will buy it– the BBC for one– but the public worldwide is not that stupid, not any more anyway. The Israeli propaganda machine has been put on the back foot, thanks to live unhampered footage direct to social media. It may be able to convince an Israeli public, cocooned in a frenzy of manufactured fear, but all the world can see right now, apart from those in Western ivory towers, are mountains of dead Palestinian children. The cold revolving door of stock excuses no longer sanitises the hands of the killers, their masters or their masters’ friends. The emperor is naked, covered in blood and eating children.

We’re not sure if the Guardian will employ his services again, but Anthony’s ideological orientation – which paints Israel as a genocidal, child murdering, racial supremacist state – would certainly seem to be more at home on the extremist, antisemitic fringes of the internet than in a putatively serious newspaper.