In memory of Ali Hashemi Rafsanjani: the “pragmatic” anti-Semite

On Sunday, Ali Hashemi Rafsanjani, the former President of Iran and a major figure in its Islamic Revolution of 1979, died at the age of 82. In the British media, most obituaries have characterised him as a moderating force in Iranian politics –the Telegraph characterises him as a “pragmatic conservative,” the Financial Times details his support of reformists in Iran, and the Guardian, whilst acknowledging that he was often ruthless, says that overall he can be characterised as a “pragmatic liberal”. 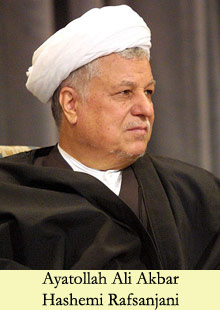 There is much that is missing or played down in these obituaries to maintain this image – his links to global terror and corruption being noticeable examples. But, one gaping hole in all the above obituaries is the failure to mention Rafsanjani’s record on Jews and Israel, one of hatred and murder.

Rafsanjani talked openly of the destruction of Israel. “Israel is a fake, temporary state. It’s a foreign object in the body of a nation, and it will be erased soon,” he said in 2015. In December 2000, he told residents of Israel to expect a “reverse exodus,” when they are forced to leave when the “tumour” of Israel is removed from the map. For decades he attended the Qods Day rally, Iran’s annual day for anti-Zionist rhetoric, and calls for the end of the Jewish State.

But Rafsanjani was not only guilty of hateful rhetoric about Israel.  He has Israeli and Jewish blood on his hands. During his Presidency (1989 – 1997), Hezbollah, the Iranian backed terrorist group, bombed the Israeli embassy in Argentina in 1992, as well as the AMIA Jewish centre in Buenos Aires in 1994, killing 85 people.  As The Tower recently noted, Argentine investigators believe the AMIA bombing was approved at a meeting attended by Rafsanjani. (The prosecutor Alberto Nisman, who formally accused Iran of involvement in the attack, and Argentina for covering this fact up, was mysteriously found dead in 2015.)

None of the above obituaries mention these events, or even have any reference to “Israel” or “Jews.” Technically that is not correct – the Telegraph obituary does mention Israel once, referencing its role in the Iran-Contra Affair. In the most absurd way, an obituary of the man who called for Israel’s destruction manages to blacken Israel’s image whilst preserving that of its nemesis.

It is not uncommon for UK media outlets to gloss over the anti-Israel hatred of the Iranian leaders. The BBC’s profile of Ayatollah Ali Khamenei, Iran’s Supreme Leader, makes no mention his regular and open calls for Israel`s destruction. (Just this December, Khamenei tweeted, “If Muslim’s and Palestinians unite and fight, the Zionist regime will not be in existence in 25 years.”) But the case of Rafsanjani is even more egregious, as Rafsanjani is considered by the Guardian to be “liberal.” The fact that Rafsanjani was relatively more liberal than his contemporaries in Iran should not be used to cover up the uncomfortable truth – that anti-Israel hatred pervades all elements of the Iranian leadership, “moderates” and conservatives alike. This fact may harm the neat categorisation so common in media coverage of Iran – but the facts should guide the narrative, not the other way around.

(Editor’s Note: When using the word “antisemitism”, UK Media Watch always uses the Working Definition of Antisemitism as a reference.)