On Feb. 8th, we were among those who tweeted our objections to a Telegraph headline accompanying an article about George Soros’s funding of an anti-Brexit group.

Whatever your views on Brexit, or your views on Soros, it's very unfortunate that @Telegraph editors evoked the "secret plot" trope to characterise the Jewish billionaire's (quite open) support for keeping Britain in the EU. https://t.co/irlUbvjrvO pic.twitter.com/Eoli2ZgN5V

Though it’s troubling that the paper didn’t revise the headline, which falsely suggests that the Jewish billionaire’s activities are “secret”, and evokes tropes about ‘Jewish cabals’, we didn’t believe that editors (or the journalist who wrote the piece) intentionally evoked an antisemitic narrative.  Further, the Telegraph, on the whole, is a responsible publication that’s usually on the right side of the debate about antisemitism, and is typically careful to avoid anti-Israel rhetoric which crosses the line to antisemitism. Perspective and nuance, when calling out media outlets on such matters, is important.

Equally important to those inclined to pounce on the Telegraph are the qualities of self-reflection, honesty and moral consistency – traits clearly absent when Guardian editors chose to publish an official editorial about the Soros row.  The editorial (The Guardian view on George Soros: the best of the 1%, Feb. 12) didn’t condemn the Telegraph by name, but the ‘right wing’ paper was clearly their target when it complained that “Soros has…been the target of organised hate campaigns, often coloured with antisemitism”, and further called out, as “utterly unforgivable” such “antisemitic tropes in the attacks on his policies and his ideas.”

The hypocrisy of the Guardian calling out the Telegraph is staggering, as the use and legitimisation of antisemitic tropes by their editors and commentators has been continually documented on this site.

In Dec. 2017, a Guardian book critic evoked the “Jesus chasing money changers from the Temple” theme to affirm the claim by a pro-Palestinian writer that Israel’s occupation of the West Bank was a “commercial real estate project that conscripts Zionist rhetoric for profit”.  As we noted, many scholars of antisemitism trace the age-old antisemitic charge of “Jewish greed” to the New Testament story of Jesus and the money changers cited by the Guardian journalist.

In May, an official editorial in the Observer (sister publication of The Guardian) on Donald Trump’s visit to the Middle East suggested that Israel’s prime minister was ‘pulling the strings’ of US foreign policy on Iran.

In an example quite similar to the Telegraph’s Soros headline, in 2016, during the Republican Primaries, the Guardian published a political analysis warning that another Jewish billionaire, Sheldon Adelson, represents “the invisible hand that guides Republican fortunes”.

Though the headline was later revised without comment, the words “invisible” and “invisible man” still appear in the text and photo caption to characterise Adelson – a narrative of wealthy Jews nefariously influencing political outcomes which mirror the Telegraph headline.

But, there are far worse examples over the years of the Guardian legitimising or promoting antisemitic ideas.

In 2014, they published a letter suggesting that Jews (Israeli Jews and Jews in the diaspora) themselves bear responsibility for the rise of European antisemitism.

That same year they published an op-ed justifying Palestinian antisemitism as a natural reaction to Israeli behavior. 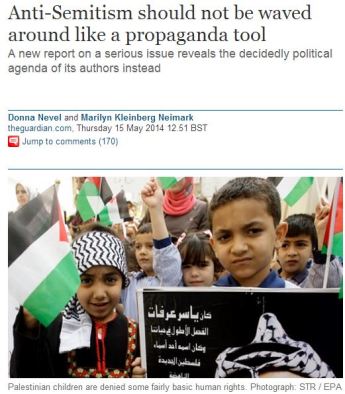 In 2012, they published this cartoon by Steve Bell – who has a history of mocking charges of antisemitism and employing visual language reflecting historic calumnies about Jews –  titled “Tony Blair and William Hague’s role in Israel-Gaza clash” which evokes the antisemitic canard of Jewish control and over non-Jewish politicians – in this case, the Israeli Jewish leader manipulating, like puppets, British leaders to support his policies.

That same year, the Guardian’s Ewen MacAskill’s wrote an analysis alleging that President Obama’s need for Jewish money explains a throw-away line in his State of the Union address affirming America’s “iron-clad commitment to Israel’s security”.

Also in 2012, the Guardian’s Simon Jenkins alleged that US sanctions against Iran were the result of the influence of the Israel lobby. (Jenkins thus far hasn’t commented on how the ‘powerful’ Israel lobby somehow failed to kill the Iran Deal.)

In 2011, the Guardian published a letter by Alison Weir defending the hideous libel that Israeli soldiers kill Palestinians to harvest their organs. That same year, the Guardian’s Chris McGreal suggested that American Jews exerted slave-like (“slavish”) control over the Bush administration. (The language was eventually amended, but there was no apology from McGreal or editors acknowledging the antisemitic history of this idea.)

2011 was also the year the Guardian ran to the defense of Sheikh Raed Salah, leader of the Islamic Movement in Israel, who was attempting to visit the UK.  Despite the fact that Salah was found in a British court to have promoted the antisemitic libel that Jews use the blood of non-Jews to bake “their holy bread”, the Guardian, as CST noted, suggested that efforts to deny Salah a visa to visit the UK “had been engineered by the Israeli Government and carried out, at its behest, by its ‘local’ supporters and forced, somehow, upon the Home Secretary”.

That same year, they published a letter by notorious anti-Semite Gilad Atzmon which defended his book ‘The Wandering Who?’, a work which the CST characterized as “probably the most antisemitic book published in this country in recent years.”

Also in 2011, Guardian journalist Deborah Orr penned a bizarre and widely condemned piece arguing that Israel’s decision to release more than 1,000 Palestinian prisoners in exchange for one Israeli (Gilad Shalit) was evidence of the state’s inherent bigotry, a racist, supremacist calculus which was informed, she suggested, by the Jewish notion of being the “chosen people”.  (Though Orr was forced to pen an apology of sorts, the language wasn’t amended.)

In 2010, two Guardian critics gave a positive review to Caryl Churchill’s play, Seven Jewish Children, and then published an online version of the play at their site.  In this piece of anti-Israel, and anti-Jewish, theatrical agitprop, Anthony Julius noted, “Jews confess to lying to their own children and killing Palestinian children”, “confess to something close to a project of genocide” and “acknowledge the source of their misanthropy to be Judaism itself”.  CST, in their annual report on Antisemitic Rhetoric, observed that the Guardian’s online production of the play was “illustrated by a photograph of a Jewish Passover Seder meal, showing participants dipping their fingers in red wine that is reminiscent of blood”.  The report concluded that “this rooted the play in Jewish family tradition, rather than anything to do with Israel”.

In 2009, the Guardian published an article by Peter Preston, chief editor of the Guardian from 1975 to 1995, titled “Israel barks, the US media wags its tail”, alleging that the Zionist lobby dominates US foreign policy and the media.

Of course, these are simply some of the more blatant examples.  Though editors are now (due in part to our efforts) less likely to publish explicitly antisemitic rhetoric (or allow antisemitic comments below the line) than in years past, their obsessive criticism of Israel – coverage which many believe fuels antisemitism – and consistent tendency to obfuscate antisemitism from Palestinian leaders, or pro-Palestinian activists in the West, continues unabated.

Our blog’s work to date has shown that, despite modest improvements, the Guardian still has little credibility on the issue of anti-Jewish racism, and we feel justified in being extremely skeptical that the editor responsible for the piece condemning attacks on Soros was motivated by a genuine anger towards antisemitic expressions.