British Jews to go to the polls this Sunday to vote for a new President of the community. 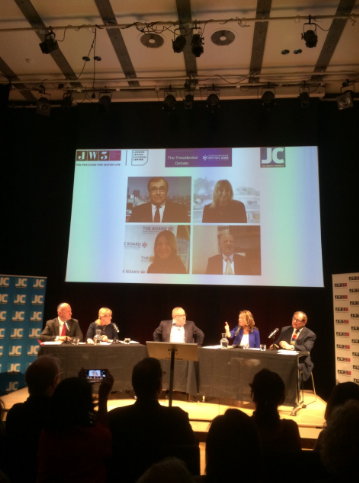 I was at JW3 in north-west London on Tuesday night to hear the four candidates for the President of the Board of Deputies of British Jews state their case with the election taking place this coming Sunday. Anyone who is a member of a UK synagogue can vote in the election.

The current President, Jonathan Arkush, is standing down after only one term. He will be a hard act to follow. He has been a calm and safe pair of hands when interviewed by the media, especially during the current antisemitism crisis in the Labour Party.

He has been clear and concise at describing when criticism of Israel crosses over into antisemitism; for example, when there’s a disproportionate focus on Israel, Holocaust equivalence or comparisons to Nazism.

The four candidates to replace him are: Edwin Shuker (62) who is sephardi Jew who escaped with his family from Iraq through the mountains of Iran, Marie Van Der Zyl (52) who is an employment solicitor and a current Board of Deputies vice-president, Sheila Gewolb (70) is another Board vice-president who seems to have had some success countering antisemitism by meeting with the Muslim Council of Wales, and Simon Hochhauser (65) who has had great success in the technology sector both in the UK and Israel.

All the candidates were very solid on defending Israel and you can read about them in more detail here.

My only concern is whether there will be more done to counter antisemitism on university campuses. There are hundreds of meetings held on UK campuses throughout the year where young students are hearing horrific things said about Israel without any challenge whatsoever. Tens of thousands of students each year are being led to believe, inter alia, that “Israel is an apartheid state”, “Israelis behave like Nazis” and “Israel is ethnically cleansing the Palestinians.” By ignoring the situation on campuses the problem of antisemitism in the UK will never be solved as there is a constant conveyor belt of new antisemites coming out of our universities.

Antisemitic professors and lecturers are helping to spread this antisemitism. Graduates then go into the media, politics and charity sectors where they are given the resources and opportunity to spread hatred of Israel, and Jews generally, even further.

On a more positive note this Saturday night in Lisbon is the final of the Eurovision Song Contest where Israel’s entrant Netta Barzilai is the favourite to win. It is a huge turnaround after last year’s competition during which Israel’s jury head, the charming Ofer Nachshon, announced live on air that Israel would not be involved in the competiton in future due to the huge broadcasting dispute in Israel.

As ever a boycott campaign has been underway to get other the Eurovision countries to award Netta no points. So if you are watching and are near a phone or have the app then maybe consider giving Netta your vote. It would be great if she could win and if she does it will definitely be next year in Jerusalem!

Hopefully UK singer SuRie will also do very well and could win if Netta doesn’t. Here are the details of how to vote for Netta or SuRie.

We wish you a good weekend, shabbat shalom and a peaceful time for Israelis who are currently under threat from Hezbollah and Iran in the north and Hamas in the south.