On Tuesday May 8th, President Trump announced that the United States is pulling out of the Iran Deal. In the days leading up to that decision there had been a flurry of diplomatic activity, and a galvanised and intense public discussion about the merits and drawbacks of the deal. In the midst of this important debate, there were some points made that cannot go unchallenged. Amongst them is the fact that Iran’s provocations in the region were severely downplayed in a way that warped the true picture.

An editorial in The Observer (sister site of The Guardian) “Trump’s folly in risking not just peace in the Middle East,” warned a few days before Trump’s announcement of the grave dangers of pulling out of the deal. Warning of likely “wide-ranging and extremely serious” consequences, the editorial warns that President Trump’s actions could trigger a “broader destabilisation of the Middle East.” 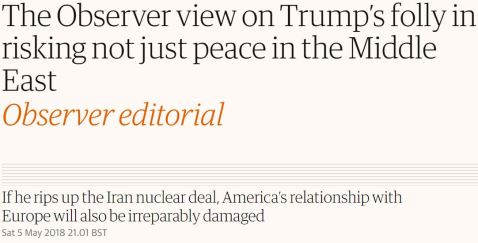 Just how stable is this Middle East which President Trump might wreck?

Iran supports terrorist groups around the region – Hezbollah in Lebanon, the Houthis in Yemen, Hamas in Gaza. Each of these are already causing havoc: Hezbollah are engaged in the Syrian civil war, the Houthis are part of the bloody Yemenite civil war, and Hamas continue to make life miserable in Gaza. Most significantly, Iran provides crucial support for Bashar Assad in Syria. Thousands of Iranian fighters, Iranian weapons, Iranian generals, based in tens of bases around Syria – all are supporting the greatest murderer of the 21st century. So surely before talking about how Trump might destabilise the Middle East, there should be a reckoning with the actual instability there today, as a result of the actions of Iran.

The editorial does not totally ignore this point, but it severely downplays these egregious facts, saying that “Iran’s actions in Syria, Yemen and other places are cause for legitimate Western concern….. but these are separate problems.” “Legitimate concern” seems a bit of an understatement for supporting Assad, whose war has left 500,000 people dead, 5.6 million refugees, and 6.6 million internally displaced people. The editorial does lambast Iran as “its human rights record is dreadful, witness its inexcusable treatment of Nazhanin Zagar-Ratcliffe.” Somehow, holding a journalist in prison incorrectly raises the ire more than the support for a genocidal dictator.

The article attempts to ignore and downplay the fact that Iran is currently causing death and destruction across the Middle East, saying they are a source of “legitimate concern.” And then it attempts to paint a picture of how US actions will be what causes the Middle East to go up in flames, with “wide-ranging and extremely serious” consequences.

Here is the basic question: Why is the Guardian more concerned about possible future instability caused by Washington’s pullout from the Iran Deal than the actual death and destruction that Tehran is causing today in the Middle East?

Aron White has a BSc in Politics and International Relations from the University of London (Lead College: LSE), and is a graduate of the Jewish Statesmanship Center in Jerusalem. His writings have been published at the Jerusalem Post, JNS, The Daily Caller and the Algemeiner.