When I first saw the clip, posted on Facebook by a friend shortly after Shabbat, my stomach churned with a discomfort nurtured by a very particular history. 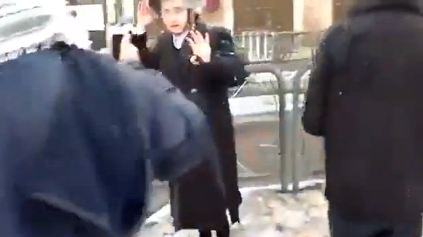 A small group of religiously observant, traditionally dressed, peyote wearing Jews are seen outside in some city centre, hurriedly attempting to get to their destination, as they are confronted by a group of hooded youths.

One of the pursued men falls as he slips on a step while attempting to escape the mob.

The shaky hand-held camcorder follows the Jews as they are pelted with snowballs, pushed and shoved. The sound of mocking laughter is heard.

As the Jews continue onto the sidewalk, attempting to distance themselves from the original gang, others emerge to confront them.

There are menacing shouts from the crowd. More snowballs are thrown at the moving targets as they attempt in vain to avoid the confrontation.

A traditional hat is quickly snatched from one of the pursued men.

One spectator is seen excitedly photographing the moment, clearly enjoying a first-hand view of the frightened Jew.

Without any context, I had on some level initially believed that the one minute and fifteen second YouTube video was filmed on the streets of a European city and not, as I later learned, near the Damascus Gate in the Old City of Jerusalem.

The attack took place on Shabbat. The victims were possibly on their way back from praying at the Kotel (Western Wall).

A quick glance at the Israel page of the Guardian confirms that such ugly images of antisemitic bullying by Arabs, in the capital of the Jewish state, do not pique the journalistic curiosity of the paper’s Jerusalem correspondent.