“Israel Apartheid Week” kicked off on Tuesday night with star guests Ben White and Dr Ang Swee Chai speaking at a UCL Friends of Palestine event on Medicine And Apartheid in Palestine.

Dr Ang Swee Chai, an orthopaedic surgeon, set up Medical Aid For Palestinians and is a self-confessed fundamentalist Christian. She said that when she was growing up she had lots of Jewish friends and supported Israel. Then in 1982 she turned on the TV and saw Israeli planes dropping bombs on Lebanon. Many of those killed and wounded, she said, were non-combatants.

So she immediately resigned from her hospital job and flew to Beirut under the auspices of Christian Aid. She ended up joining the Palestinian Red Crescent Society, which, she admitted, was affiliated to the PLO.

She worked in Beirut’s Gaza Hospital near to Sabra and Shatila and learnt from Palestinians that “many lost their homes when Palestine became Israel”.

She said that the first two things Palestinian children in Sabra and Shatila learn are “their name and the village in Palestine they came from”. “Palestine was never a desert, but a rich centre of civilisation, culture, art and dance,” she continued.

Then she turned to the horrific events of 16th-18th September 1982 in Sabra and Shatila. She said that the day before 700 Israeli tanks drove from South Lebanon to Beirut and when the Israelis arrived they started shooting people.

At Gaza Hospital, she continued, the Israelis demanded that any foreigners leave. She presumed they were going massacre the patients. But two doctors refused to leave and so “our patients survived”.

Throughout her talk she showed graphic images (see below) of dead, dying and badly wounded people and of a mass grave containing, she said, 800 to 1,000 bodies. She finished off with that notorious map of a “disappearing Palestine“.

She described how an 11-year-old boy, who survived, was lined up along with his family as they were “systematically killed” and how he “heard his sister and aunties being raped and crying”.

She finished with an emotional plea:

“I realised what was going on. If I had any doubt about what the Palestinian refugees said to me about how they lost Palestine and had been brutalised, I had no doubt now. Why was I brought up to be so bigoted and prejudiced against the Palestinians. Will G-d give me a chance to do something right for the rest of my life? This story should be told. The Palestinians are still dying and suffering today.”

During the Q&A a Jewish student asked her whether being Christian was the reason for her failure to mention that the massacres at Sabra and Shatila were actually carried out by Christians, to which she responded (see clip here):

“This particular group of Christians was trained by Israel. Six of them confessed that Israel set them up…Where this kind of atrocity happens we need to know who made it possible, who planned it, who sealed the camps so nobody can escape, who flared the skies so the massacre can continue, who provided the bulldozers and all that. The Israeli Kahan Commission found Sharon indirectly responsible. The Christian militia itself was actually under the command of Israel.”

She said she now has further evidence, which has upset her Jewish friends, that the IDF were inside Sabra and Shatila when the massacres occurred.

She was awarded the Star of Palestine.

Meanwhile, Ben “I do not consider myself an anti-Semite, yet I can also understand why some are” White did his usual “Israel is an Apartheid state” rant using slides to attempt to make some sort of case (see below). One slide is humorously headed “Israel is worried”.

Inevitably, White explained the aims of the BDS (Boycott Divestment Sanctions) movement, called for a boycott of Israel and finished off quoting ex-IAF captain Yonatan Shapira:

“It is no longer enough to try and change Israel from within. Israel has to be pressured in the same way apartheid South Africa was forced to change.”

White didn’t mention that Shapira once sprayed “Free Gaza” and “Liberate all the ghettos” on to a wall nearby the Warsaw Ghetto where so many Jews lost their lives at the hands of the Nazis.

The same Jewish student asked White why anything he says about Israel is to be trusted considering he “is an anti-Semite”. White responded (see clip here) by saying that he had already made his “opposition to anti-Semitism perfectly clear”. It was a shame White wasn’t pressed about this racist tweet.

When I asked White to explain the difference between the tactics of the Nazis targeting German Jews in the 1930s and those of the BDS movement targeting Israeli Jews in 2014 he kindly plugged my blog before responding (see clip here):

“In one case you are talking about a fascist regime targeting a minority and persecuting them on an anti-Semitic basis. The other case you’re talking about a tried and tested method of civil society to resist oppression, a way of the weak challenging the powerful…Most people can tell the difference…”

White will be doing a reprise of his UCL talk at Amnesty International’s HQ in London on 21st March.

It’s obviously a very quiet time in foreign affairs for Amnesty to be hosting such an event. 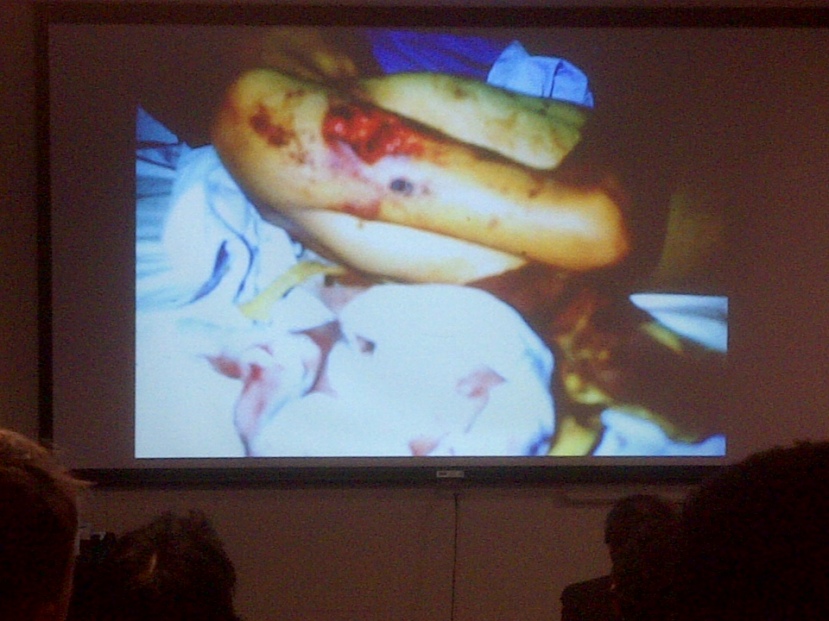 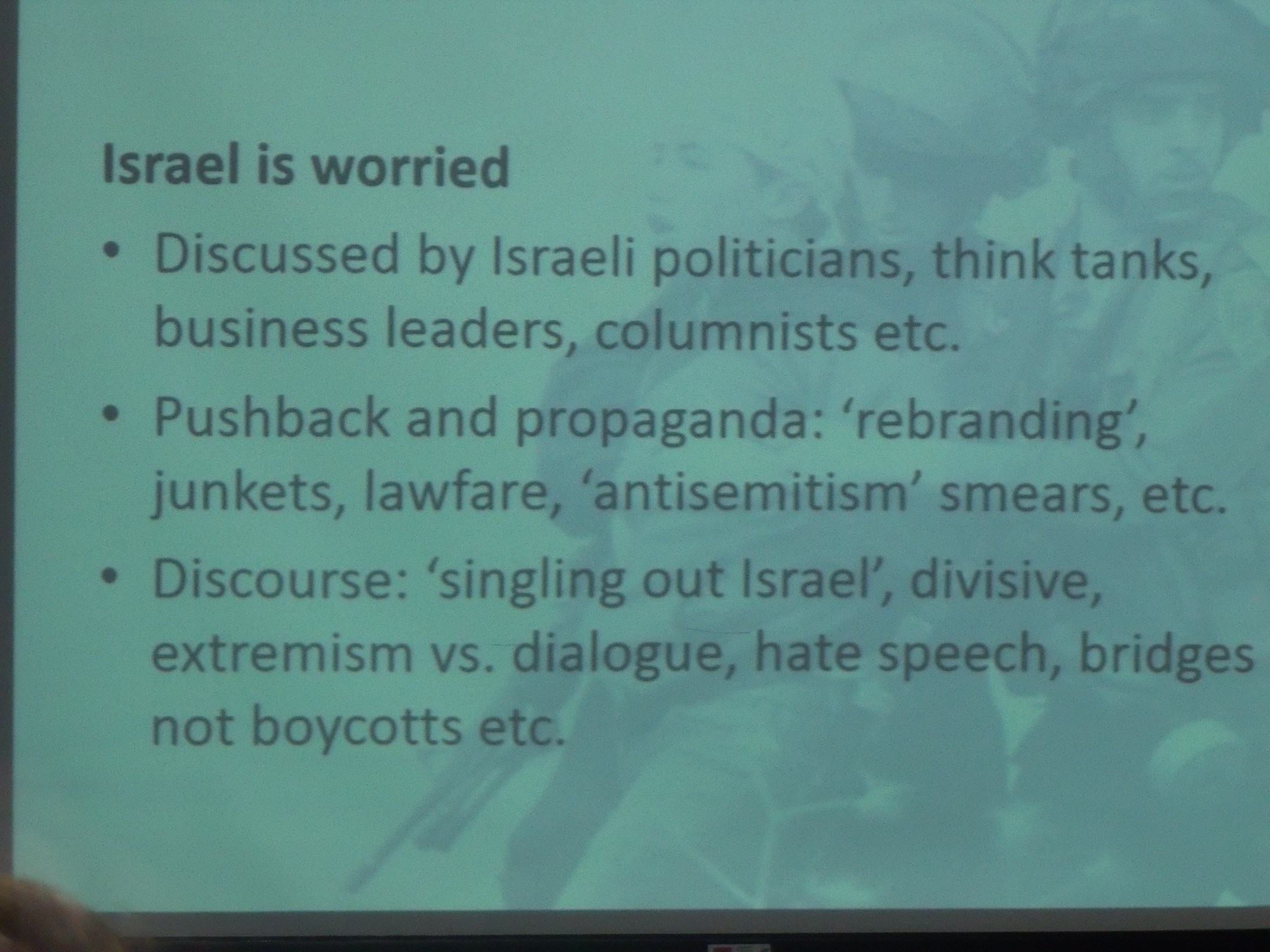 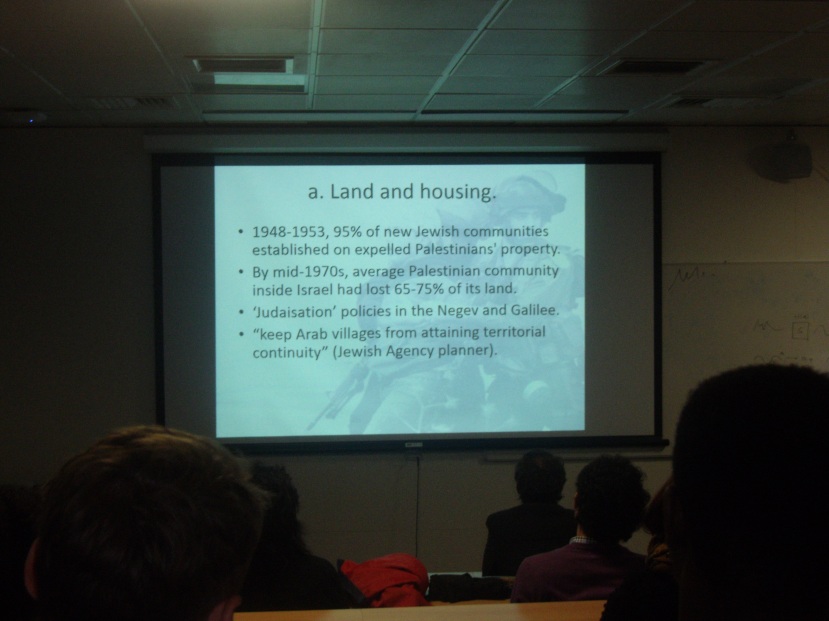 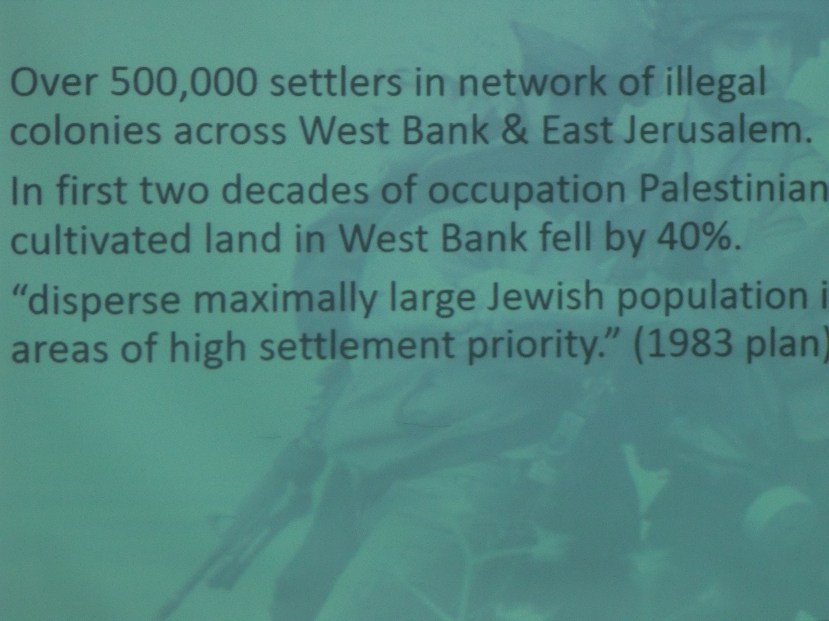 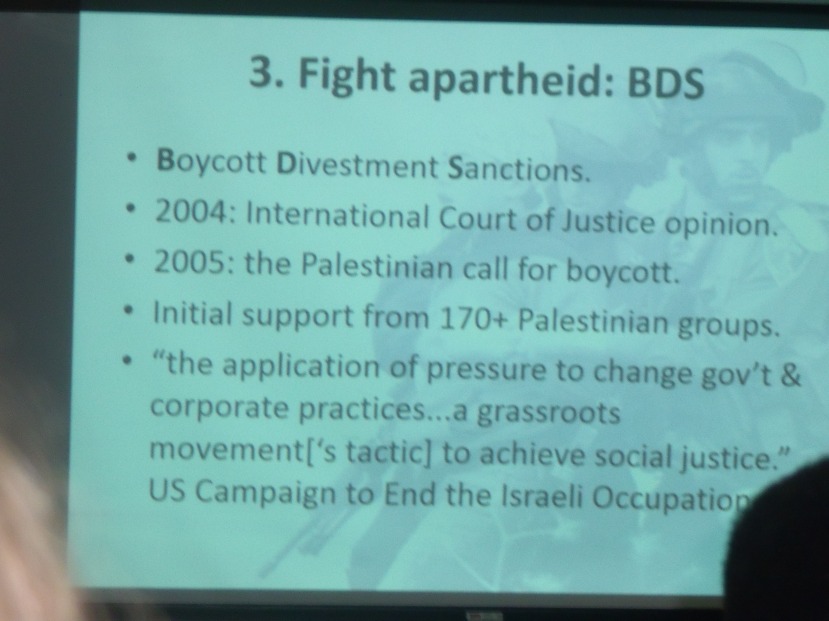