Cross posted from the blog of Richard Millett

I was patiently queuing for Ami Ayalon’s joint KCL and LSE Israel Society’s’ talk outside the Norfolk Building of King’s College, London tonight. I had arrived early and was near the front of the queue but soon the doors were closed as the room held only 50.

Some 50 to 60 people were left shut outside on the street, among them 15 fuming anti-Israel activists who had planned to get in and disrupt the talk.

These activists from SOAS, KLC and LSE Palestine Societies had already handed out leaflets attacking Ami Ayalon and Israel. But with their being shut outside chaos ensued, and the police had to be called.

Ayalon was head of Israel’s Shin Bet between 1996 and 2000 and then served as a Labour MK. He also launched a peace initiative called The People’s Voice. He’s now in the UK being whisked around by Yachad to give various talks, the gist of which seem to be Israel needs to mend its ways.

The activists’ leaflets, after incriminating Ayalon and Shin Bet in war crimes, accused Ayalon of being “overtly racist” for supporting a two state solution because this implies “Israeli Jews must always be a majority…due to a fear of losing the ethnic and colonial supremacy Israel has enjoyed since 1948”.

As soon as the doors shut the frustrated anti-Israel activists pounded the doors and the windows looking into the talk. They screamed “Free Free Palestine”, “Viva Viva Palestina” and “From the River to the Sea Palestine will be free” and smashed a window.

They then climbed the windows to unfurl a banner. A fire alarm was set off and eventually police vans and police cars pulled up and 20 police constables protected the building.

Ayalon’s talk lasted an hour. Ironically, Ayalon was talking in front of a white board describing the rules for “safe spaces” at universities. But there is no “safe space” for an Israeli-Jew at British universities.

Maybe after tonight so-called peaceniks like Ayalon will realise that Israeli Jews like himself are not hated for the way he thinks they behave but simply for who they are; citizens of the Jewish state.

More photos and a clips (with smashed window) from tonight: 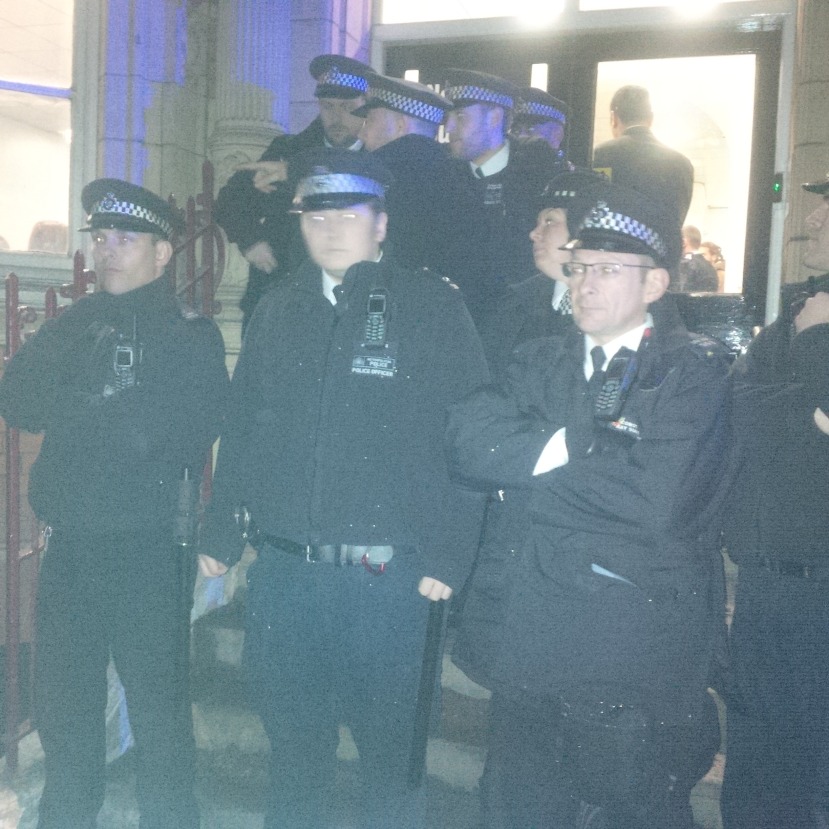