Perhaps in an attempt to restore his anti-Zionist credentials after the political beating he took in 2014 for appearing to recognize Israel as a Jewish state, the Palestinian envoy to the UK, Manuel Hassassian, launched a deceitful anti-Israel diatribe in the Guardian on April 15th.

Hassassian’s lies include the accusation that Israel is not really a democracy, has engaged in a pattern of extrajudicial assassinations of innocent Palestinians and is guilty of ethnic cleansing.

Though the Palestinian envoy’s op-ed contains several smaller distortions spaced throughout the op-ed, he manages to cram the biggest and most pernicious falsehoods in the first two paragraphs.

Israel repeatedly proclaims itself a democracy, but anyone who has read any history or analysis beyond the headlines will see how far this is from reality. Every day Palestinians are killed or arbitrarily detained. The recent cold-blooded killing by an Israeli soldier of Abed al-Fattah Yusri al-Sharif, a man who was lying injured in Hebron after stabbing an Israeli soldier, was caught on camera and so momentarily peeled away the veil of democracy.

But this murder was just the latest example of extrajudicial killings of Palestinian youths caught up in the uprisings of recent months. This violence, which must be seen as part of the occupation of Palestinian territories, is making the Palestinian population more desperate and insecure. It is a strategy that amounts to psychological terror and is part of an undeclared agenda of ethnic cleansing.

Hussassian’s suggestion that one use of excessive force by one Israeli soldier, against 21-year-old Palestinian terrorist (“youth”), undermines Israel’s “claim” to be a democracy is itself undermined by the fact that the soldier was immediately arrested and is facing manslaughter charges. Democracies can’t ensure that its armies behave properly in every occasion, only that there is accountability when they do act in a manner inconsistent with use-of-force regulations.  The strength and vibrancy of Israel’s democracy – as evident by the country’s free and fair elections, its independent judiciary and a feisty and adversarial press – simply can not be denied by any serious political observer.

Moreover, the suggestion that this one incident represents a larger pattern “of extrajudicial killings of Palestinian youths” is given without even the slightest evidence, and represents a perfect example of the kind of incendiary rhetoric used by Palestinian extremists (and political leaders) to incite more violence.  The latest wave of terrorism targeting Israelis in knifing, shooting and car ramming attacks, which has resulted in over 30 deaths and more than 400 injuries, was ‘sparked’ by the decisions of individual Palestinians.  They weren’t merely “caught up in violence” as Hassassian claims.  Hundreds of Palestinian terrorists have launched attacks (against Israeli victims as young as 13*) freely and of their own volition, and often with one central task: to murder Jews.

Worse, Hassassian contextualizes this non-existent Israeli offensive against ‘innocent’ youth as part of a larger pattern of “ethnic cleansing” of Palestinians.

This extraordinary lie, as we’ve noted previously in response to such intellectually unserious charges, is easily refuted by a few population statistics.

So, in summary, in the territory where Jews rule or have ruled in some manner since 1948, the Arab population has increased dramatically, while territories in the Middle East where Arabs rule (representing over 99% of the total land) have become either nearly or completely free of Jews. 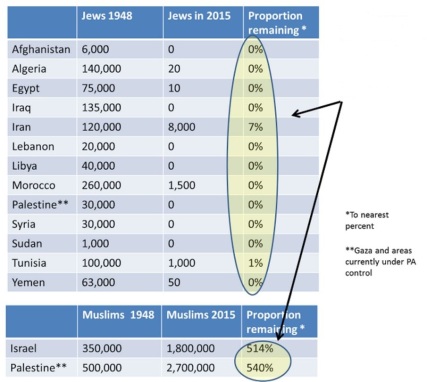 Graphic created by blogger Edgar Davidson. (Note: Iran’s Jewish population is in dispute, but official Iranian statistics compiled in 2011 placed the figure at 8,756.)

The claim made by Palestinians such as Hassassian – legitimized by editors at the Guardian – that the democratic Jewish state is ethnically cleansing Palestinians represents a historical and moral inversion so egregious that it should hold as much weight amongst putatively well-informed opinion leaders as the ‘debate’ over whether or not Jews are trying to take over the world.

*Editor’s Note: The youngest Israeli victim in the current terror campaign was a 3-month old baby, killed in a Palestinian car ramming on Oct. 22nd.