We recently tweeted about a Guardian piece (I’m the only trip-hop artist in Palestine! The musicians shaking up the occupied territories, April 12th) so full of errors and wild accusations that editors took the unusual step of completely removing it “pending review”. 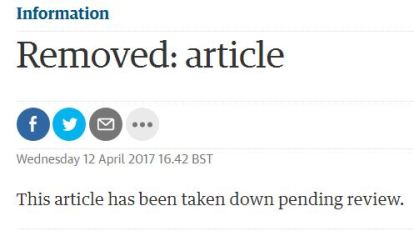 We had emailed editors to complain about several errors – including erroneous Palestinian unemployment statistics and a claim that IDF engages in “summary killings” – but the most egregiously inaccurate claim we noticed can be seen this subsequent UKMW tweet.

This morning we saw that the article was restored, with an addendum at the bottom stating that it was “amended to correct and clarify details”.  However, whilst the highly inflated PA unemployment stats were removed entirely, and “summary killings” was changed to “killings”, they failed to correct the most bizarre suggestion, that (putatively “unscalable”!) 8 metre high concrete walls surround Haifa!

We contacted editors again this morning, asking for a correction. We’ll keep you posted.

UPDATE: The article was finally corrected on April 18th.