Last week, following communication with UK Media Watch, Times of London editors corrected a false claim, in a May 17th article by David Aaronovitch, that the first Hamas suicide bombing was an act of retaliation in response to Baruch Goldstein’s massacre of 29 Muslim worshipers in 1994.  Before securing the correction, we had pointed this out to Aaronovitch in the following tweet.

.@DAaronovitch Contrary to your claim (attached) in @thetimes that 1st Hamas suicide attack occurred in 1994, in retaliation for the Hebron massacre, the 1st such Hamas suicide bombing actually took place in 1993, before Baruch Goldstein's attack. See this https://t.co/qLnbq6bqw4 pic.twitter.com/cYc7hFe8YV

Our colleague Shlomi Ben Meir also clarified to columnist, in a subsequent tweet, that the first such Hamas suicide attack actually took place 10 months before the Hebron attack, on April 16, 1993 in Mehola Junction in the West Bank, killing the terrorist and a Palestinian bystander. 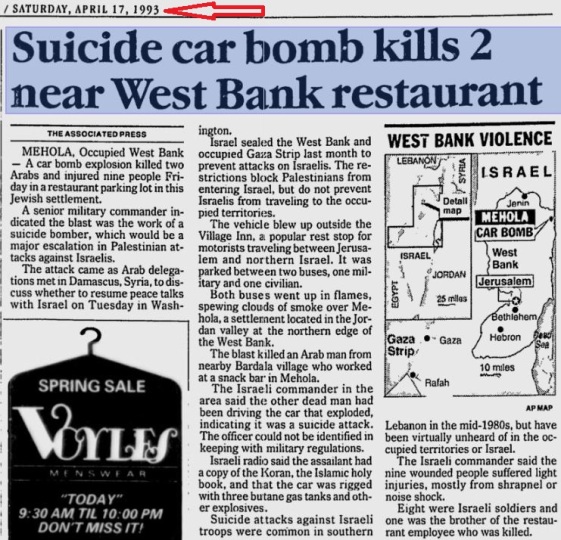 The timeline is important because the way the original paragraph was worded would suggest that Hamas’s decision to launch a campaign of suicide bombing, which, as Aaronovitch framed it, led to the 2nd intifada and a derailing of the Oslo Peace Process, was arguably ignited by the fanatical Jewish settler.

Whilst the original language claimed that “the first Hamas suicide bombing…was supposedly in retaliation for this attack”, the new language qualifies the words to note that the the 1994 suicide bombing of a school bus he’s referring to was the first such attack “causing [Israeli] fatalities”.

But, this admission completely undermines Aaronovitch’s argument, as the previous Hamas suicide attacks – again, before Baruch Goldstein’s attack – were of course also designed to cause Israeli fatalities, even if they were ‘unsuccessful’.

So, Hamas’s sadistic tactic of launching Palestinian suicide bombers to murder Israeli men, women and children, the timeline now shows, had nothing to do with Goldstein’s act of terror.