Yesterday, we tweeted about an extremely inappropriate photo accompanying a May 27th Guardian article on an increase in British arms exports to Israel.

Curious photo choice by @guardian editors, illustrating an article about an increase in UK arms exports to Israel by showing a soldier looking at a burning wheat field, near Kibbutz Nahal Oz, caused by a Palestinian kite bomb pic.twitter.com/2FZz5tA7X5

The photo actually depicts one of the more than 100 fires in Israel caused by hundreds of kite bombs launched by Palestinians in recent weeks – fires which incinerated an Israeli nature reserve, killed scores of animals and caused millions of shekels worth of damage to area farmers.

Further, as we noted in a subsequent tweet, Guardian editors completely changed the original caption from AFP, which accurately described the scene:

“An Israeli soldier looks at a burning wheat field near the Kibbutz of Nahal Oz along the border with the Gaza Strip, on May 15, 2018 after fires were started by Palestinian demonstrators”

A few hours later, we tweeted the Guardian’s head of photography, Fiona Shields, alerting her to the problem.  Shields responded to our tweet by promptly replacing the original photo with one more appropriate. 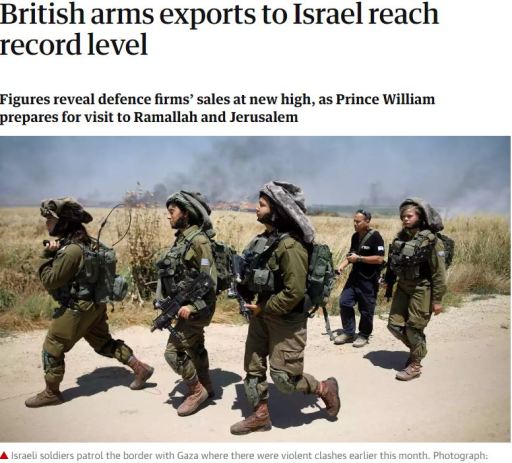