The Independent legitimised the warped political views of linguist Noam Chomsky today, in a column by their US editor, Andrew Buncombe.  The article, titled “Israeli intervention in US elections ‘vastly overwhelms’ anything Russia has done, claims Noam Chomsky”, highlighted a charge made by the American academic in an interview with the fringe radical left show ‘Democracy Now’.

Here’s the Chomsky quote highlighted by the Indy journalist:

“Israeli intervention in US elections vastly overwhelms anything the Russians may have done, I mean, even to the point where the prime minister of Israel, Netanyahu, goes directly to Congress, without even informing the president, and speaks to Congress, with overwhelming applause, to try to undermine the president’s policies – what happened with Obama and Netanyahu in 2015.”

The power of the pro-Israel lobby has long been one of the contentious, and disputed, issues in Washington. In 2007, John Mearsheimer and Stephen Walt, published The Israel Lobby and US Foreign Policy, which described the lobby as “loose coalition of individuals and organisations who actively work to steer US foreign policy in a pro-Israel direction”.

Despite denials by the authors that their book – which ADL and others concluded evoked historically toxic narratives alleging Jewish control of U.S. foreign policy – was antisemitic, Mearsheimer later endorsed a book by Gilad Atzmon characterised by CST as “quite probably the most antisemitic book published in [the UK] in recent years”.

Moreover, Chomsky’s argument, that Netanyahu’s address to Congress is worse than Russia’s meddling in the US election is just absurd.  The Israeli prime minister was merely trying to use his bully pulpit to convince Congress to vote against the Iran Deal.  Russia’s government reportedly engaged in a systematic campaign designed to literally swing a US election – an attempt to undermine America’s democracy that evokes the actions of the KGB in the 1930s.

Leaving Chomsky’s convoluted argument aside, the decision by the Indy editor to promote the academic’s charge on Israel’s putative influence on the US political system, without informing readers of his record of unhinged commentary on a host of other international issues, is extremely troubling.

Chomsky, for starters, has argued that the U.S. is “the world’s greatest terrorist state“, has praised the Vietcong, defended the Khmer Rouge, and expressed support for terror group Hezbollah.  As far as Hezbollah, we should note that the terror group doesn’t ‘merely’ wish to destroy Israel.  Their leader, Hasan Nasrallah has proudly proclaimed that Jews anywhere in the world are legitimate targets 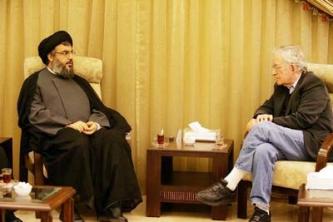 Chomsky in a tête-à-tête with Hezbollah’s Nasrallah

Here are other quotes from the esteemed radical professor on Jews, Zionism and Israel.

“Jews in the US are the most privileged and influential part of the population… privileged people want to make sure they have total control, not just 98% control. That’s why antisemitism is becoming an issue.”

“In the Jewish community, the Orthodox rabbinate imposes its interpretation of religious law… Were similar principles to apply to Jews elsewhere, we would not hesitate to condemn this revival of the Nuremberg laws.”

Chomsky may be prolific as a linguist, but, politically, he’s an ideological extremist whose views need not be legitimised and promoted by respectable media outlets.