The British Daily Mail apparently can’t be sure that Palestinians from the Gaza Strip really fired 180 rockets and mortars at Israel in a 24-hour period earlier this week. A Daily Mail article today (“‘If our children live in fear, Hamas should live in fear’: Israel’s Culture Ministry calls for ‘murderous group’s’ leaders to be assassinated in the wake of two-days of rocket fire and airstrikes“) three times referred to these attacks as “alleged,” as if the fact that Hamas fired 180 rockets and mortars at Israel has not yet been confirmed. Moreover, reporter Sara Malm casts further doubt on the fact that the rocket attacks took place by unjustifiably enclosing the information in quotation marks, as if this was merely an Israeli claim and nothing more. Notably, she does not refer to the retaliatory Israeli airstrikes in Gaza as “alleged,” nor does she qualify them with quotation marks. Both events — Hamas’ rocket attacks on Israel, and Israel’s retaliatory airstrikes — unquestionably occurred, are not in dispute, and should be equally reported as fact.

If Malm was unable to travel southern Israel to see for herself the damage, to visit the wounded, and to meet the children attending day camps in bomb shelters, she could have availed herself to the plentiful visual documentation of the 180 rocket and mortar attacks. Indeed, one such image, a dramatic Reuters photograph depicting the Iron Dome intercepting one of the incoming rockets, accompanied Malm’s story. (More on the images later.) 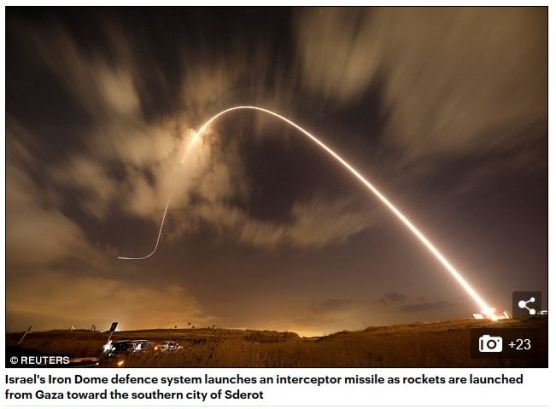 Qualifying the barrage of rocket fire against Israel – an undisputed fact – as unconfirmed is an egregious misrepresentation of reality.

Malm writes (third paragraph) that Culture Minister Miri Regev’s “comments followed two days of fighting, beginning with an alleged ‘180 rockets and mortars’ being fired from the Hamas-controlled Gaza Strip on Wednesday, which saw Israel respond with airstrikes” (Emphasis added.) Note the inconsistency. She does not write: “which allegedly saw Israel respond with ‘airstrikes.’”

Further down, she repeats the egregious double standard: “This week’s fighting saw Israel hit some 150 facilities belonging to Hamas in retaliation for ‘180 rockets and mortar bombs’ allegedly fired from the strip on Wednesday night.” (Emphasis added.) Note again that Malm qualifies only the Hamas attacks as “alleged” and places them in quotation marks, while she states the Israeli strikes as fact, despite the fact that both sides’ actions are equally confirmed and not in dispute.

Finally, the bullet points at the top of the article includes scare quotes around “180 rockets,” as if this information is still unconfirmed.

In a separate problem, out of the 23 still images accompanying the article and depicting the Israeli-Hamas fighting, in which Palestinians fired 180 rockets and mortars at Israel and Israel hit 150 Hamas targets, just two images depict Palestinian attacks on Israel. (One is the aforementioned Reuters photograph of the Iron Dome in action. The other shows damage from last month’s attacks, not from the current round of 180 rockets and mortars.) The rest – 19 – depict Israeli airstrikes from the last day or so (including eight of the same strike on the Said al-Mis’hal cultural center, which Israel identified as a site used by Hamas’ interior security forces for military purposes, information omitted from all eight of the relevant captions). Why the gross imbalance in graphics? Once The Daily Mail is placing a huge emphasis on the al-Mis’hal building, why leave out the Israeli information that it served Hamas’ interior security forces for military purposes? 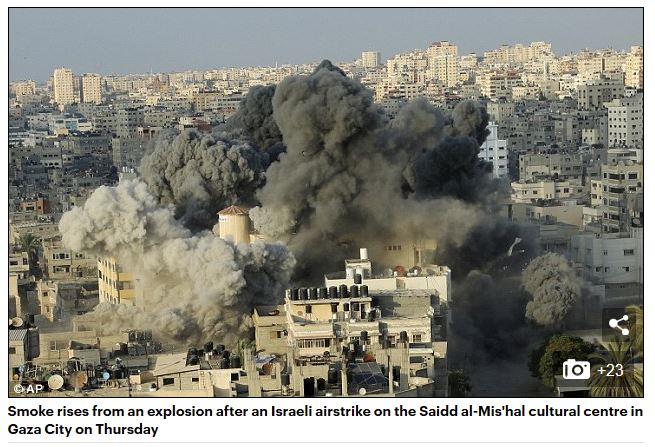 One of eight photographs that the Daily Mail published of the al-Mis’hal building. The photo collection contained just two photographs showing Palestinian attacks on Israel.

CAMERA has contacted The Daily Mail to call on editors to remove references to the Palestinian rocket attacks as “alleged” and to request more balance in the photo selection. Stay tuned for an update.