Did the Israeli prime minister lie or use phony intelligence during his speech at the UNGA last week when accusing Hezbollah, the Iranian-backed terror group believed to possess the most lethal non-state military force in the world, of hiding precision missile conversion sites in the Beirut suburbs?

The Telegraph seems to believe, on very little evidence, that this is, at the very least, a strong possibility.

The headline of their report, by Mid-East correspondent Josie Eison and Joseph Haboush (who writes for the Beirut based Daily Star) on a tour by Lebanon’s foreign minister, GebranBassil, a Hezbollah ally, to foreign journalists of the alleged missile sites, sets the tone: 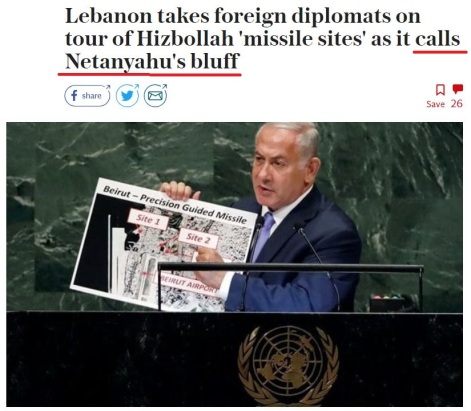 Here are the opening paragraphs:

“As you can all see, there is no secret Hizbollah weapons warehouse here,” Gebran Bassil, Lebanon’s foreign minister, said wryly as he gestured down below the empty stands of the al-Ahed football stadium.

In an unprecedented move, Mr Bassil decided to call his bluff on Monday, offering foreign ambassadors and journalists a tour of each of the sites in question.

“We are used to Israel fabricating information (…) but this time Israel lied in the presence of delegates from all over the world, which is why we took this extraordinary measure today,” Mr Bassil told the 73 envoys and reporters gathered.

Bemused football players looked on as Lebanon’s entire diplomat and press core descended on the stadium and began searching every corner of the pitch, seemingly looking for evidence that could prove Mr Netanyahu’s accusations right.

If there ever was any weapons silo here, there was certainly nothing to be found on Monday. Either Mr Netanyahu stood before the General Assembly with faulty or outdated intelligence, or perhaps more improbably the stash was moved – undetected – in the days since his Thursday address.

First, Netanyahu specifically asserted that the sites were underground, rendering the media tour of the stadium’s field meaningless. Further, as the photo in the IDF tweets embedded in the Telegraph report shows, the claim is that the underground sites are near the field, not on top of or directly underneath it. (note the red arrow)

Moreover, how would journalists participating in the tour know with any degree of certainty that their hosts showed them every (underground) facility in the area?

But, especially peculiar is the report’s skepticism that Hezbollah – whose forces control the area where the stadium and airport are located, and recently boasted of having acquired “highly accurate weapons” – could have cleaned evidence of the sites in the three days between Netanyahu’s speech and the media tour.  The reporters don’t even try to explain why it’s “improbable” that the Shiite militia group, which has a history of moving weaponry to built-up areas in southern Lebanon to hide them from UN forces, would have covered up such a missile facility.

The Telegraph’s promotion of the Lebanese PR event in defence of Hezbollah is another example of the media’s frequent failure to subject the accusations of Israel’s enemies to the same degree of journalistic skepticism and critical scrutiny that Israeli claims are almost always subjected to.